The 3rd President of Indonesia, BJ Habibie, Passes Away 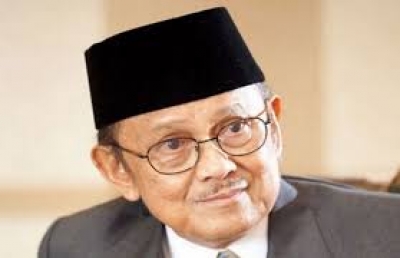 Indonesia's third president, Bacharuddin Jusuf Habibie, passed away. Habibie, who was born in Parepare, South Sulawesi, on June 25, 1936, died of a disease he suffered.

"I must convey this, that my father, the 3rd President of the Republic of Indonesia, BJ Habibie, died at 18.05," Thareq said.

Habibie has been undergoing intensive care at the hospital since September 1, 2019.

"His heart has stopped moving, as I said. Because of age and a lot of activity," said Thareq.

Habibie will be buried in the Kalibata Heroes Cemetery, South Jakarta, next to the grave of his wife, Hasri Ainun Besari or Ainun Habibie.

Minister of State Secretary Pratikno said the state has been preparing a funeral to be held on Thursday (12/09).

"A funeral has been prepared next to her wife, Ainun Habibie, in slot 120-121," said Praktikno at the Presidential Palace, Jakarta. (KOMPAS/CNN)