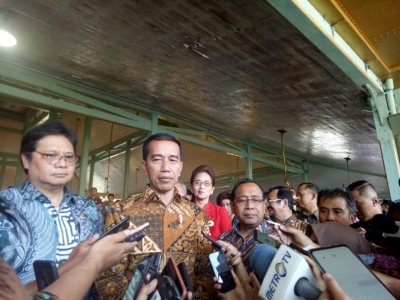 President Joko Widodo admitted that he is still waiting for the election results of Chairman of the People's Consultative Assembly (MPR) before discussing the matter of preparation for the inauguration of the elected President and Vice President for the upcoming 2019-2024 period. Speaking after attending the commemoration of the 2019 National Batik Day, Wednesday (Oct 2) at Puro Mangkunegaran, Surakarta, President Joko Widodo said that he can not open communication with the MPR given that the MPR Chairman had not been elected.

Related to the proposal to advance the inauguration, President Joko Widodo conveyed that he fully submits the decision of the inauguration to the Assembly. The president admitted that he received input from a number of volunteers related to discourse of advancing inauguration, but Jokowi fully submits to the Assembly. Earlier, in a press release, Central Representative Council of Projo people organization suggested to General Election Commission (KPU) to bring forward the inauguration of Elected President and Vice President on Saturday, October 19, 2019. This proposal was submitted for practical reasons, in order the community could oversee the inauguration procession of the elected President and Vice President. Jokowi  will  end  his 2014 - 2019 Presidential    period on October  20, 2019. According to the schedule of the Commission, Jokowi will constantly be inaugurated on October 20, 2019//  Ndy/trans.yati