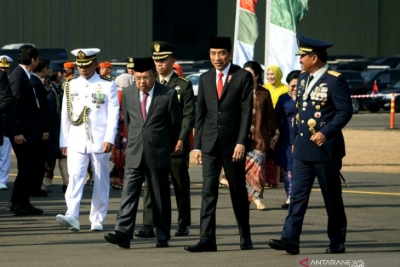 "The nation has also conveyed special tribute to the soldiers killed in the line of duty to protect the sovereignty of the Unitary State of Indonesia," President Jokowi stated at the ceremony to observe TNI’s 74th anniversary held at the Halim Perdanakusuma Air Base in Jakarta on Saturday.

The president remarked that the TNI had acted promptly in assisting people in disaster-hit regions and also successfully secured the simultaneous elections.

At the international level, the Indonesian Military has belted achievements by emerging the winner in shooting competitions in Malaysia and Australia.

Other accomplishments in the defense sector are development of an integrated military base in Natuna Island to be followed by development of similar bases in Biak of Papua Province, Morotai in North Maluku, Merauke in Papua, and Saumlaki in Maluku.

On July 30, the TNI had established a Special Operation Command (Koopsus) to support anti-terrorism operations.

The Indonesian Military had held a joint training in early September involving 12,500 soldiers of three forces and established Joint Regional Defense Commands in Tanjung Pinang in Riau Islands, Balikpapan in East Kalimantan, and Biak in Papua on September 27.

"All of these have marked a shift in the military culture in Indonesia, which earlier was separated based on the forces, but now, it has been integrated and supported by the professional character of soldiers," Jokowi added.  (ANTARA)

More in this category: « Jokowi Still Waiting for Election Results of MPR Chairman to Discuss the Inauguration Jokowi Upbeat about Palapa Ring Educing Improved Trade, Bureaucracy »
back to top
Home