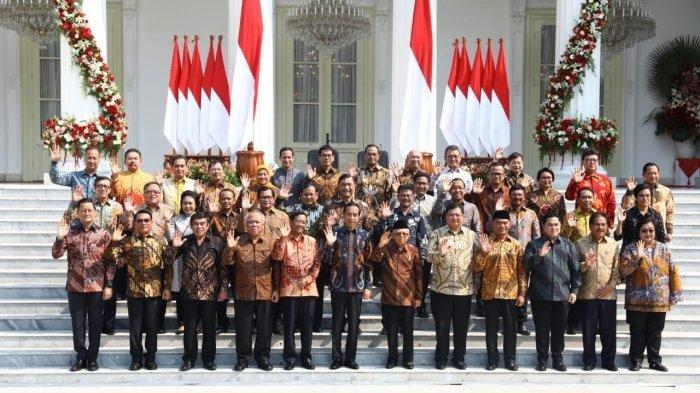 Finally, Indonesian President Joko Widodo announced his cabinet members three days after his inauguration. Along with Vice President KH Ma’ruf Amin, the president did something unusual when announcing his aides for the next five years. President Joko Widodo announced his ministers and institutional leaders by sitting on the stairs in front of the State Palace. There were 34 ministers and 4 ministerial-level positions. They will work together in the administration of Joko Widodo and Ma’ruf Amin to bring Indonesia forward.

For three days, the people of Indonesia watched figures answering summon from the State Palace. Many speculated the right figures to support the president for the next five years.

President Joko Widodo fulfilled his promise that his cabinet will have more professionals and fewer politicians. More than 56 percent are professionals. However, the most interesting part is that Joko Widodo appointed Prabowo Subianto, his former rival, to become Minister of Defense. This is a very strategic position in a government. Former National Police Chief General Tito Karnavian as Home Affairs Minister became a hot topic.

As we know, President Joko Widodo has prerogative rights. It seems he did not want to be dictated by his supporters, since it will be fatal for his government. Along with Vice President KH Ma’ruf Amin, the President also let young generation joining in as national development engine. More overly, with the upcoming national demographic bonus, the government wants to plant strong will to move fast, so that Indonesia can catch up with her neighboring countries.

Despite of pros and cons about the chosen ministers of Indonesia Onward, no one is perfect. Everyone has their own weakness and strength. Instead, the most important thing is that professionalism of president’s aides in executing better bureaucracy is what can bring Indonesia onward. With slogan “Work, work, work…,” hopefully bureaucracy inside the government will speed up every matter and ease the development and economy.

More in this category: « Joko Widodo-Ma’ruf Amin's Cabinet Ahead of ASEAN- Korea Republic Summit »
back to top
Home