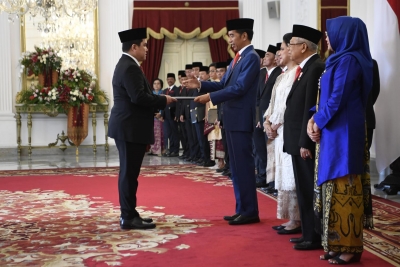 After being inaugurated along with 33 other ministers, Minister of State Owned Enterprises (SOEs) Erick Thohir immediately took over the position from the previous Minister, Rini Soemarno in a ceremony at the SOE Ministry in Jakarta last Wednesday. Erick Thohir said afterwards, he would conduct a total evaluation of SOEs in the framework of professionalism and create a good and healthy climate.

Erick Thohir, who has a business background, is also ready to clean up in order to find positive things in order to build and synergize SOEs.

Indonesia currently has 115 SOEs. President Joko Widodo often stated that too many SOEs is inefficient. Therefore, the president encouraged state-owned enterprises engaged in the same field to join and form a holding company.

According to Rini Soemarno, the holding companies will eventually form a super holding, such as Temasek in Singapore.

In addition, she also entrusted Minister Erick Thohir to maintain the togetherness and synergy among SOEs, so they remain strong and not become weak due to competing with each other.

Furthermore, Rini Soemarno also instructed SOE Minister Erick Thohir to continue the SOE function in accordance with the mandate of the SOE Act to encourage people's economy. Therefore there are many SOE programs to improve the ability of micro, super micro and small businesses.

Erick Thohir acknowledged that the task of SOEs is very heavy because it is not only demanded as a profit-oriented corporation, but also acts as a locomotive for Indonesia's development. Erick Thohir also wants SOEs, Regionally Owned Enterprises (BUMD) and the private sector not only to excel domestically but also to be able to penetrate the global level.

According to Erick Thohir, this could be achieved if all parties had the same mission to make Indonesia progress in accordance with the name of the new Cabinet “Forward Indonesia”.

More in this category: « Indonesian Chamber of Commerce and Industry Economists great welcome the composition of Economic ministers Indonesia Reforms Five Sectors to Simplify Business »
back to top
Home