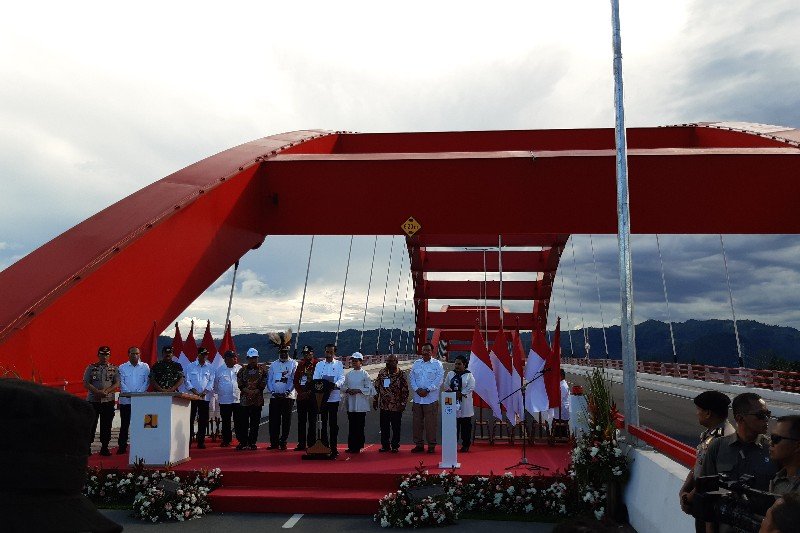 Coinciding with the commemoration of the Youth Pledge on October 28, on Monday afternoon local time, President Joko Widodo inaugurated Youtefa Bridge in Jayapura City, Papua. The name ‘Youtefa’ was taken at the request of the local customary community because the bridge is above the Youtefa Bay.

In his welcoming address, President Joko Widodo said that this bridge becomes a milestone in Papua, which is not only a major symbol of unifying the nation, but also a symbol of the importance of progress towards developing Papua.

The Youtefa Bridge was built in 2015. President Joko Widodo laid the first stone to mark the beginning of the construction of the bridge with 732 meters long and 21 meters wide. This development spent around Rp1.8 trillion. The bridge connects the main area of Jayapura City with Muara Tami District. The budget fund for building the bridge was spent from both the central and regional governments. The composition of the financing is a symbol of good synergy between the central and regional governments. Now, Papua has a new icon, Youtefa Bridge. This bridge with characteristic red curved poles can be an amazing attraction for tourists. In addition, this bridge can also boost economic relations between Indonesia and Papua New Guinea, which so far has been through Skouw Cross-border Post (PLBN) located in Muara Tami.

The Youtefa Bridge is a form of the commitment of President Joko Widodo's administration in building infrastructure in Papua. Although there have been security disturbances in Papua lately, which has attracted international attention and criticism of his government, President Joko Widodo has repeated the commitment in the second term of his administration. Papua becomes the first location he visited after his inauguration as president for the 2019-2024 term with Vice President Ma'ruf Amin. It is hoped that with the operation of the Youtefa Bridge, the mobility of both people and goods of Papua can run smoothly and Papua can catch up with the advanced regions in Indonesia.

More in this category: « Youths in the Technological Era 4.0 New Paradigm in Preventing Radicalism »
back to top
Home