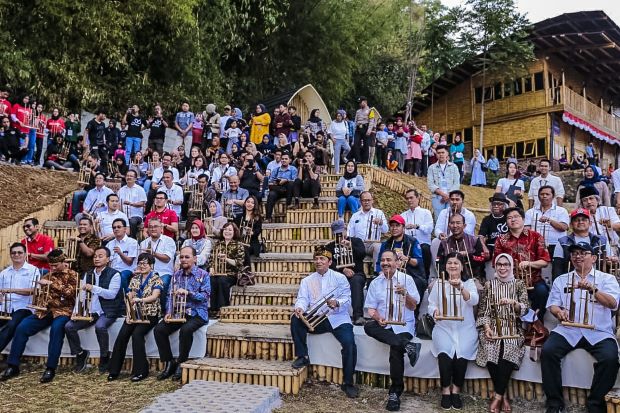 On October 11, former Minister of Tourism, Arief Yahya, inaugurated Puri Digital Destination in Bojongkoneng, Cimenyan, Bandung regency, West Java. According to Arief Yahya, by the existence of this tourism destination, millennials have more choices of tourism objects they like. The digital site presents rarely available contents. Its spot is also instagramable, and there are 3 beautiful views, such as bamboo forest, sunrise spot, and city light. Meanwhile, Head of Tourism Office of Bandung, Agus Firman Zaelani said that there are many fun objects which can be found by tourists at Puri Bambu, beginning from cultural performance, live music, workshop, until typical culinaries of Cimenyan.

If you are interested to come to Puri Bambu Digital Destination, do not have to worry because access road to Cimenyan is not difficult. Puri Bambu is completed with lodging and hotel. The tourism object is located on the hill so it has fresh air and beautiful scenery. From the East, you will see the beauty of mountain scenery, while from the South, you will be presented the city’s views. Sparkling light of the city at night adds more beauty of the view.

It is called the digital destination object, because all promotional events use social media platform including for transactions also uses digital money. Called Puri Bambu, in order that people keep familiar with bamboo   as one of materials produce in Indonesia. No wonder, all of the buildings in this site are dominated by bamboo. To protect and to make the bamboo buildings more interesting, those bamboos are painted. The performance of arts in this object also completed with bamboo instruments besides other musical instruments. Usually Puri Bambo presents Tarawangsa and Merak dances, Angklung Saung Mang Udjo performance to entertain the visitors. Talking about culinary, there are various typical foods provided at this tourism detination. Cimenyan itself is also known with peuyeum or fermented cassava and honey. There are also some other typical foods made from cassava, corn, rice flour and vegetable and tubers which can be brought as souvenirs. You can also find traditional beverages such as bandrek, bajigur and typical coffee of West Java in Puri Bambu digital tourism object.

More in this category: « GILI KEDIS, LOMBOK Pentingsari Village »
back to top
Home