Museum of Vredeburg Fortress in Yogyakarta 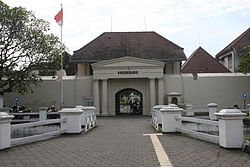 Vredeburg fortress is a fort which is located in front of Gedung Agung and Yogyakarta sultanate, precisely on Jalan Margo Mulyo. Now, the fortress becomes a museum. In a number of buildings inside the fortress, there is diorama on Indonesian history.

Vredeburg fortress was built by Sri Sultan Hamengku Buwono I for the first time in 1760 on the Dutch request, which was at that time governor of Director of Java’s North Coast, led by Nicolaas Harting.

The fortress was built as the central government and residential defense of the Dutch at that time, by being surrounded by trenches which most of it has been reconstructed and can be seen until now. The squared-shape fortress has monitoring tower at the four corners.

Since 1992 based on the Education and Culture Ministry’s decree, the fortress has been functional as museum. Some of the main collections of the museum are diorama of Soedirman’s inauguration as Great Commander of Indonesian Military, Surjopranoto’s typewriter, Soetomo’s document and many others.