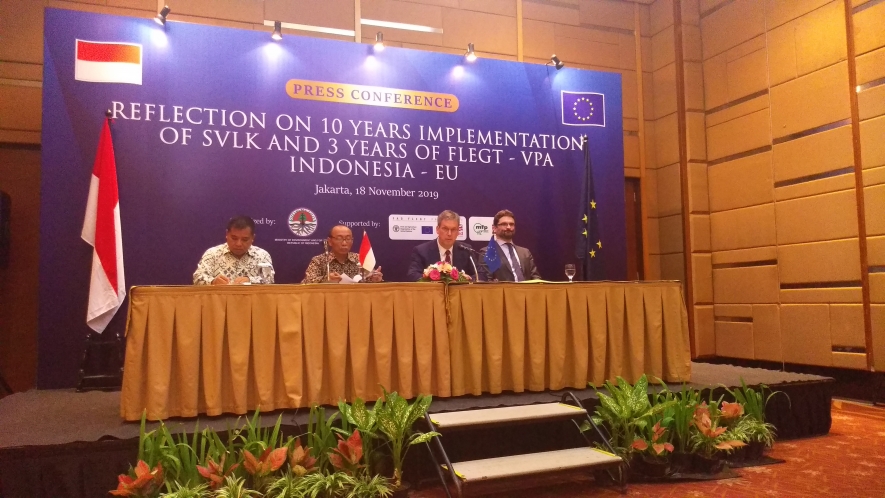 Indonesia had officially launched Timber Legality Verification System (SVLK) in 2009, to support Indonesian forest conservation effort and illegal logging mitigation as well as to increase legal wood trade. Ambassador of European Union Vincent Piket at a Press Conference on the sidelines of ‘10 years reflection of SVLK implementation and 3 years license of  Forest Law Enforcement Governance and Trade -FLEGT in Jakarta on Monday (Nov 18) explained that SVLK can be implemented well by Indonesia in cooperation with the European Union.

“The progress has been very good. We have seen a steady rise in Indonesian export of timber to the European Union. We have seen an increase in the added value of the Indonesian timber sold of the EU market. In value terms we have grown increase faster in quantity terms which is a good sign. The system also works in terms of the cooperation between Indonesian authority and the EU and members states it's very positive and today we have the joint implementation committee meeting. If you have seen the agenda, very dens agenda, very concrete matters reporting on what we have achieved and what we still need to do. So I'm quite positive about it will continue to work to lead to result,” said Ambassador of European Union Vincent Piket.

Ambassador Vincent Piket moreover added that  Indonesia is the first country which led the cooperation since Indonesia is the world biggest producer of legal wood. Indonesia can also be a role model for other countries in the world which really appreciates the Timber Legality Verification SystemSVLK in Forest Law Enforcement, Governance and Trade (FLEGT)// Nuke/Trs: AF