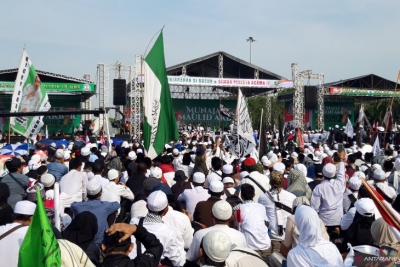 Governor of Jakarta Anies Baswedan unequivocally praised the peaceful manner in which this year's 212 reunion rally ran, thereby mirroring Indonesia's unity in diversity.Addressing the annual event at the area of National Monument (Monas) Square in Central Jakarta on Monday morning, the Jakarta governor pointed out that those thronging the venue hailed from different parts of the archipelago.In his speech at the event, Baswedan, dressed in his daily uniform as Jakarta governor, drew attention to the significance of ensuring justice for all to preserve genuine unity in diversity of the nation.Baswedan joined respected figures on the stage of this 212 reunion rally at the invitation of the organizing committee.Attendees at the event also held to commemorate Maulid Nabi Muhammad, or the birthday of Prophet Muhammad, comprised the Islam Defenders Front (FPI) Chairman, KH Ahmad Sobri Lubis, and Great Indonesia Movement (Gerindra) Party's elite, Fadli Zon.FPI leader Habib Rizieq Shihab was offered the opportunity to deliver his recorded speech from the holy city of Mecca, Saudi Arabia, in which he apologized for being unable to partake in the event directly.Shihab, living in Saudi Arabia since May 2017, expressed keenness to return to Indonesia, but the Indonesian government has banned him from leaving Saudi Arabia to return to Jakarta.Speaking in connection with the Shihab-related issue, Coordinating Political, Legal, and Security Affairs Minister Mahfud MD had claimed earlier of no valid evidence of the government having barred Muslim cleric Shihab from returning to Indonesia.Mahfud believed it would be impossible for the government to impose the almost 1.5-year ban for Shihab since the regulation only allows a six-month ban.The 212 reunion rally has been convened consistently since 2017 to commemorate the historic moment of the 212 rally that the National Movement to Safeguard the Indonesian Ulema Councils Fatwa (GNPF-MUI) had held on December 2, 2016.Participating in the rally at that time were some seven million Indonesian Muslims hailing from different parts of the country and abroad to demand the prosecution of then Jakarta governor Basuki Tjahaja Purnama (Ahok) after he was accused of insulting Islam.Despite the huge number of participants flocking to Monas Square and its adjoining areas, the rally proceeded peacefully. The areas that the crowds of people occupied and passed by also appeared clean owing to those, who voluntarily collected the trash.Taking into account the significance of this commemorative event for strengthening "silaturrahim" (communal togetherness) among Muslims, the Indonesian Council of Ulemas (MUI)-Jakarta Chapter has let Muslims across the country join the 212 reunion rally.

More in this category: « Tens of thousands rally in Europe, Asia before UN climate summit China slaps sanctions on US over Hong Kong unrest »
back to top
Home