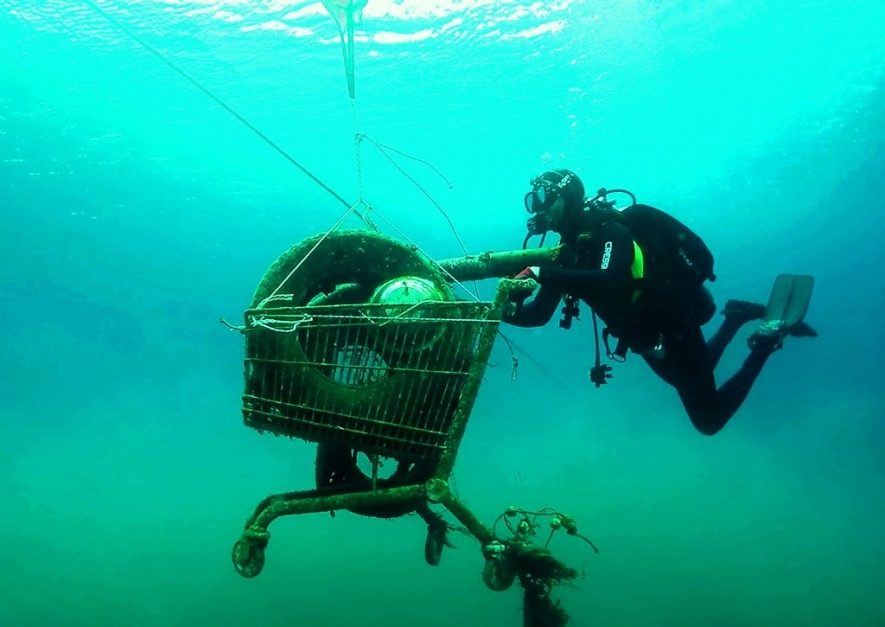 Dressed in her protective wetsuit and scuba gear, Antigone Kouteri jumps into the murky waters of Zakynthos harbor in search of plastics -- and promptly snags her arm on a submerged object.

"It was a tire," offers her patrol mate Efthymis, coming up with a discarded beer bottle. "My treat!" he jibes.

The Ionian island of Zakynthos is one of Greece's most pristine travel destinations, renowned for its azure waters and fabulous beaches, an environment clean enough to be a major Mediterranean nesting ground sought out by loggerhead sea turtles.

But even here, plastic pollution poses a grave threat to wildlife.

Kouteri is one of nearly a dozen volunteers from Aegean Rebreath, a Greek organization formed in 2017 to protect Aegean biodiversity from waste.

"Marine litter is a global issue, so it is (present) in Greece. More than 70 percent of marine litter is plastic in Greece," says Katerina Tsagari, a biologist at the Hellenic Centre for Marine Research near Athens.

Tsagari says her team has found litter, most of it plastic, in about 75 percent of loggerhead sea turtles tested.

Overall, they have found plastic ingestion in between 20 and 45 percent of the species tested, which include fish and mussels.

With a coastline of some 14,000 kilometers, one of the longest in the southeastern Mediterranean, Greece attracts tens of millions of tourists every year.

It's a regional problem. The Mediterranean, a partly closed sea, accumulates 570,000 tons of plastic annually from surrounding countries, according to the World Wildlife Fund.