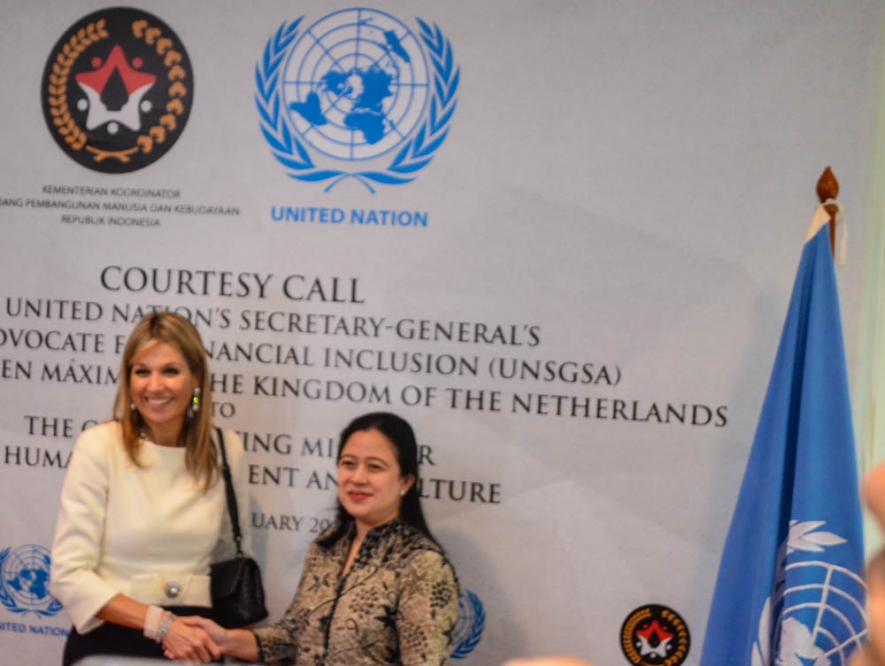 Queen Maxima paid a working visit to Indonesia on 11 to 13 February 2018 in her capacity as UN Special Envoy for Inclusive Finance. She held a meeting with Indonesian Coordinating Minister for Human Development and Culture, Puan Maharani on Tuesday 13 February in Jakarta. After the meeting, Puan Maharani told the media that Queen Maxima appreciated the financial inclusion in Indonesia. Since her first visit untul her current visit to Indonesia, there has been a lot of progress made by Indonesia where the provision of social assistance to the community has been done in a non-cash program. Minister Puan pointed out that the Coordinating Ministry for Human Development and Culture has distributed Smart Indonesia Cards to 19.7 million school children and have been distributed through state or non-cash banks. She added that the non-cash assistance of the Family Hope Program have also been disributed to 10 million mothers. In addition, Non-Cash Food Assistance to beneficiary families has also been channeled through state-owned banks. Therefore, Queen Maxima appreciated the financial inclusion in Indonesia that has been three times advanced in a not too long period of time.

Puan Maharani further said, Queen Maxima in the meeting also said that the most necessary is the connectivity between the outermost areas and the forefront of Indonesia, where social assistance is not properly acceptable. According to Queen Maxima, it would be better if the government could approach the people compared with the people who come to the banks. In the future, the government will provide 47 thousand e-warongs where beneficiaries of the Hope Family program can shop online. Qeen Maxima last visited Indonesia in 2016. (VOI/SEKAR/AHM)