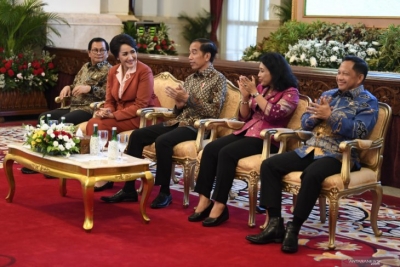 President Joko Widodo (Jokowi) has urged the Indonesian Congress of Women (Kowani) to thwart the spread of false news and spread education that can positively contribute to growth of the nation's children.

President Jokowi made the statement that was addressed to Chairwoman of the Indonesian Congress of Women (Kowani) Giwo Rubianto Wiyogo while opening the 25th Kowani Congress in Jakarta, Tuesday.

"We thank the president for once again receiving Kowani for the opening of the congress at the palace," Kowani Chairwoman, Giwo Rubianto Wiyogo, noted in a statement received in Jakarta, Wednesday.

The Kowani Congress themed, "The Role of the Nation's Mothers Towards Indonesia Onward," was held in Jakarta on December 3-4. The Congress featured election of a new chairman and synergy with several women's organizations.

According to the statement, President Jokowi believed it was time for women, as the nation’s mothers, to don an active role in averting the spread of false news. He cautioned that the circulation of several news, particularly on social media platforms, including Twitter, Facebook, Instagram, and YouTube, can have a detrimental impact on the mindset of the young generation. "The president urged Kowani to spread more educational news. This is especially true for women, as the first educators to the nation's generations," she emphasized.

She stated that during the 2014-2019 period, Kowani had conducted activities in accordance with government programs, specifically, those that President Jokowi had planned for building the character of human resources in ushering in and realizing an advanced Indonesia. (ANTARA)