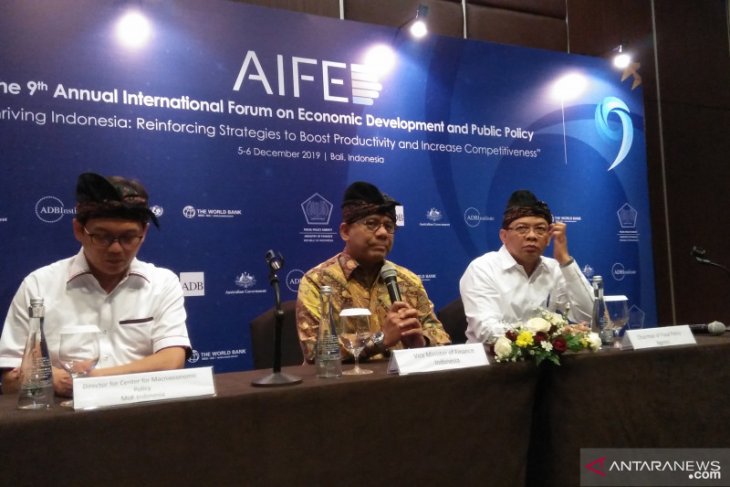 Director for Center of Macro Economy of the Finance Ministry Hidayat Amir stated on the sidelines of the 9th Annual International Forum on Economic Development and Public Policy (AIFED) in Nusa Dua, Bali, on Friday, Dec 6, 2019. (ANTARA/Dewa Wiguna/sh)

Indonesia is projected to exit the middle income trap by 2036, bolstered by the development of human resources, according to the Finance Ministry.

"Economic transformation has been carried out to build a strong basis for improving Indonesia's economy," the ministry's Director for Center of Macro Economy, Hidayat Amir, remarked on the sidelines of the 9th Annual International Forum on Economic Development and Public Policy (AIFED) in Nusa Dua, Bali, on Friday.

In 2036, public income is expected to reach US$12,233 per capita and will continue its rising trend to touch US$23,199 per capita by 2045, he noted. In 2020, Indonesia is projected to become a nation, with public income surpassing the middle income level.

In its endeavor to achieve the target, the government has designed the national medium-term development plan (RPJMN) for the 2020-2024 period, with focus on the development of human resources, infrastructure, and bureaucratic and regulatory simplification, among others.

The government has allocated Rp2,540.4 trillion (some US$177 billion) of state expenditure in its 2020 state budget plan.

In the fiscal policy, Amir stated that the ministry had provided tax incentive in the form of close to 300 percent research and development (R&D) deduction for certain R&D activities conducted in Indonesia .

The government has also offered tax incentive for education and vocational training as well as research and development, with a maximum reduction of up to 200 percent of the total expenses incurred by a company.

Of the total population, some 47 percent belong to the productive age group, while 70 percent of them are from the middle income group.

Amir noted that Indonesia had a better economy as compared to BRICS countries, or Brazil, Russia, India, China and South Africa.

Indonesia's economic growth is more stable as compared to BRICS since five years back, it was ranked as the most vulnerable among the five fragile countries according to Euromoney's Country Risk Survey.