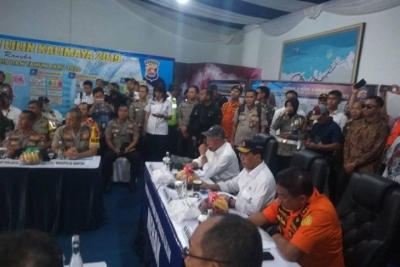 Public Works and Housing Minister Basuki Hadimuljono lauded the smooth flow of cars transported aboard ferries at Merak Port in Banten Province and Bakauheni Port in Lampung Province during Christmas and New Year holiday season."We praise the smooth transportation of cars and passengers at the Merak and Bakauheni ports during this Christmas and New Year holiday season," he remarked while observing the e-ticket service at Merak Port's executive pier on Tuesday.While referring to the figure furnished by Director of state-owned ferry operator PT ASDP Indonesia Ferry Ira Puspadewi, the total number of cars crossing Bakauheni Port in Lampung to Merak Port in Banten rose some 20 percent while those crossing from Merak to Bakauheni ports just increased about 11 percent than those recorded last year, he noted.The Trans-Sumatra toll road in the provinces of Lampung and South Sumatra might have driven the rising trend of vehicles crossing from Bakauheni to Merak ports, he noted, adding that the to-and-fro flow of cars at Merak and Bakauheni ports can be better served in future.Hadimuljono also vowed to inform those handling the Trans-Sumatra toll road projects in Lampung to ensure the provision of basic necessities, such as reliable rest areas and sanitary facilities, to provide better services to toll road users.In connection with the mode of transportation preferred by travelers during the Christmas and New Year holiday season, a recent study of the Transportation Ministry's Research and Development Division showed that 48 percent of the 2,500 respondents preferred traveling by car than train.Despite the research finding, Transportation Minister Budi Karya Sumadi recently pointed to traveling by train to cities in Java Island being a popular choice among Indonesians keen on celebrating this year's Christmas and New Year holiday season.Sumadi admitted to a drop of up to six to eight percent in the number of passengers over these past two days than the count recorded in the corresponding period in 2018."This downward trend is just recorded in short-distance trips, such as Jakarta-Cirebon and Jakarta-Pekalongan," he was quoted by ANTARA from the ministry's official website as saying.In its place, the number of passengers for long-distance routes, including the Jakarta-Solo and Jakarta-Yogyakarta ones, remains high.  "We still need to look at this trend in a week," he stated.The downward trend in the number of the train passengers undertaking short-distance trips might partly be owing to those looking to use the Jakarta-Cikampek elevated toll road recently inaugurated by President Joko Widodo, he expounded.

More in this category: « The Minister of Communication and Informatics: RRI Must Return to Tri Prasetya's Spirit MPR chairman recommends setting up world Muslim assembly association »
back to top
Home