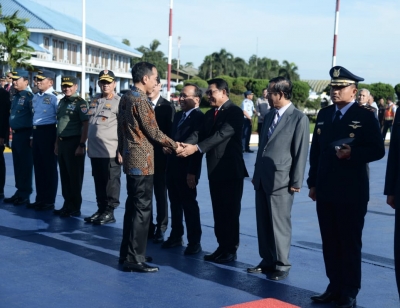 President Joko Widodo on Sunday morning [12/1] left for Abu Dhabi. The President is invited to be the keynote speaker at Abu Dhabi Sustainability Week. This forum was specifically held to discuss energy and sustainable development. Minister of State Secretary Pratikno, at Halim Perdanakusuma Airport said that in his presentation, President Joko Widodo would submit a plan to develop a new nation's capital city in Indonesia. The nation's capital city will become not only a place to live, but also a smart city with a completed with the need for a sustainable city.

"So we have many things that sustainable development is an important issue not only in Indonesia but in the world. We and Mr. President will also present about the new capital plan. With that, President wants to invite the international world to make this new capital of Indonesia a showcase, to become an example of the world, about sustainable cities with all its aspects. This is not like what the President often says that there will be zero emission and compact cities, but also innovation and creativity, economic drivers, and so forth. So the President also wants to offer that the new capital city is the one that wants to be conveyed about Indonesia's future vision of sustainable development," said Joko Widodo.

In addition to being a keynote speaker at the Abu Dhabi Sustainability Week forum, the President will first hold a bilateral meeting with Abu Dhabi Crown Prince Sheikh Mohammed bin Zayed.

Previously Foreign Minister Retno LP Marsudi said that the meeting would discuss the plan to develop investment cooperation between the two countries.

President Jokowi and Crown Prince of Abu Dhabi will also witness the signing of a memorandum of understanding between the two countries, both at the government and business level. (VOI/Ndy/PUTRI)

More in this category: Government braces for increasing medical waste during pandemic »
back to top
Home