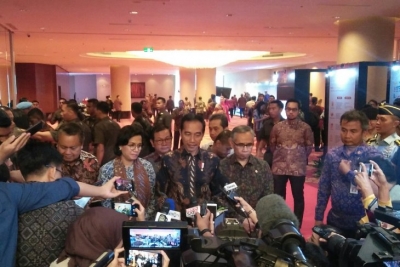 Jakarta - Indonesian Finance Minister Sri Mulyani Indrawati believes the initial trade agreement between the United States and China will lend a sense of certainty to the global economy after the trade war that protracted several months. "We will see if this agreement could last. This is a good initial step," Indrawati remarked after attending the 2020 Annual Meeting of the Financial Services Industry in Jakarta on Thursday. The agreement between the two major economies of the world is expected to end the uncertainty rife until now. She is upbeat about the initial trade agreement being sustainable, so that the global economy shows signs of improvement. On Wednesday (Jan 15), the United States and China signed an initial trade agreement that will reduce some tariffs and boost Chinese purchases of US products. The inking is also expected to ease an 18-month dispute between two of the world's biggest economies. US President Donald Trump and Chinese Vice Premier Liu He inked a deal on Wednesday at the White House that cut some US tariffs on Chinese goods in exchange for Chinese pledges to purchase more of the US farm, energy, and manufactured goods and address some US complaints concerning intellectual property practices, Reuters reported. China has agreed to step up purchases of US products and services by at least $200 billion over the next two years. China bought $130 billion in US goods in 2017 before the trade war began and $56 billion in services, according to the US data. The United States will cut by half the tariff rate it had imposed on Sept 1 on a $120 billion list of Chinese goods, to 7.5 percent. The US tariffs of 25 percent on $250 billion worth of Chinese goods, put in place earlier, will remain immediately unaltered. These could be rolled back as part of a Phase 2 trade negotiation, US Treasury Secretary Steven Mnuchin stated on Wednesday. (ANTARA)