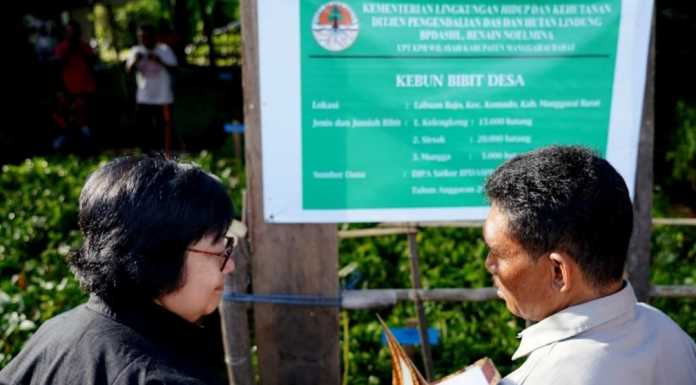 While accompanying Indonesian President Joko Widodo during his visit to Labuan Bajo, East Nusa Tenggara province -NTT, Minister of Environment and Forestry, Siti Nurbaya had the opportunity to visit the Village Seedling Gardens and prospective nursery locations for Labuan Bajo, West Manggarai, East Nusa Tenggara, on Sunday, Jan 19. Minister Siti Nurbaya said that the Labuan Bajo Village Seedling Garden was one of the results of the 1,000 village nursery program being carried out by the Ministry throughout Indonesia.

On the same occasion, Siti Nurbaya, also conducted a survey of prospective modern nursery sites in Labuan Bajo. The area of the modern nursery is around 30 hectares, located in Satar Kodi village, Nggorang, Komodo subdistrict, West Manggarai Regency. A number of endemic plants will be provided in this modern nursery and it is estimated that each year it can produce 1 million seedlings.

The development of the modern nursery of Labuan Bajo is an effort to overcome the condition of critical and unproductive land which is still widely available in the province of East Nusa Tenggara, including Labuan Bajo tourism area. With the availability of plant seedlings in modern nurseries, it will support planting efforts to create a green and beautiful environment, clean and fresh air, productive land and shady and comfortable microclimate, so that creating a positive image and increasing tourists to coming to the region.

The Village Seedlings Garden is also aimed to guarantee the need for quality seeds in large quantities quickly and sustainably in the context of planting. The modern nursery of Labuan Bajo is planned to be integrated with seed sources, arboretum, urban forests and parks as eco-edu forests. This nursery development is also in the context of supporting Labuan Bajo as one of the five super priority tourism destinations. The Indonesian government is currently developing super priority tourism destinations namely Lake Toba in North Sumatra, Borobudur in Central Java, Mandalika in West Nusa Tenggara (NTB), Likupang in North Sulawesi, and Labuan Bajo in East Nusa Tenggara (NTT).

More in this category: « ASEAN Must Become an Engine of Peace and Stability Indonesia and Italy Strengthen Cooperation in the Field of Agriculture »
back to top
Home