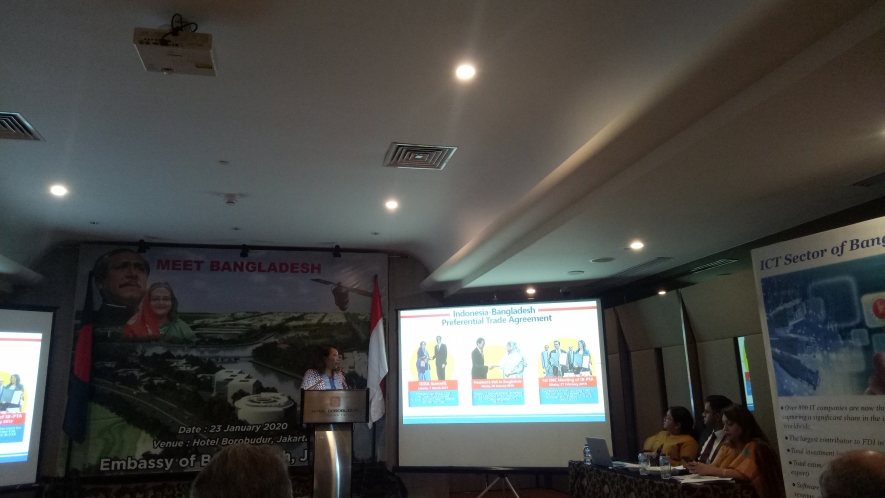 Director for Bilateral Negotiations for Indonesia, Ni Made Ayu Marthini, giving a speech at the Meet Bangladesh at the Borobodur Hotel on Thursday (23/01/2020) VOI

Director for Bilateral Negotiations, Indonesia’s Ministry of Trade, Ni Made Ayu Marthini, who gave an address at the “Meet Bangladesh” event, spoke of her hopes for the economic futures between the two nations in Jakarta on Thursday (23/01/2020). The event celebrated the newly forming trade agreements between the countries. Ni Made Ayu Marthini emphasised her hopes for free trade and a higher rate of service trades between Bangladesh and Indonesia.

“And I’m very happy to hear the spirit the Ambassador just now mentioned in Bangladesh. It’s really true. Indonesia’s government today- The same spirit that’s also shown by our presidents opening up competitiveness. How to be competitive? In such a globalised world and competitive world. And we approach our trading partners first. And then one of the first that positively consider our invitation is Bangladesh.”

Made Ayu Marthini acknowledged how Indonesia had previously only looked to countries like the US, Japan, China, and South Korea for trade agreements, but according to President Joko Widodo’s new policies, they would begin to expand to previously untapped sources, namely Africa, South America, and Indonesia’s closer South Asian neighbours like Bangladesh and Pakistan.