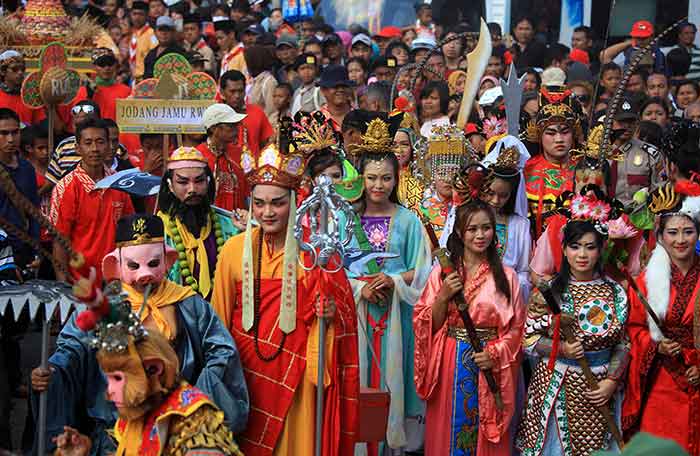 At the peak of Chinese New Year celebrations, 12 zodiacs, 12 neon nox sho, five dog lanterns, god fortune lantern, and werkudoro lanterns are also installed on Jenderal Sudirman street. In addition to beautify the city of Solo with various Lunar ornaments, various series of events were also presented to enliven the Lunar New Year 2569. At the peak of the event, the Solo government also held Grebeg Sudiro and Festival Jenang.

On February11, thousands of people packed the area of Jalan Urip Sumoharjo and Jalan Jenderal Sudirman. They came to watch the cultural caravan of Grebeg Sudiro. The unification caravan of Chinese-Javanese society began at 2 p.m. Grebeg Sudiro is a celebration which is organized prior to the Chinese New Year (Imlek) which features nine gunungan or offerings containing crops and basket cakes, the special cake of Chinese New Year celebration.

The two offerings are in the form of miniature of Monument 45 Banjarsari, the mayor's office, Loji Gandrung and a miniature of Pasar Gede. The Caravan was started from Pasar Gede - Jenderal Sudirman street - Mayor Kusmanto street - Lojiwetan junction - Kapten Mulyadi street – RE Martadinata intersection - Cut Nyak Dien street - Juanda street - Warung Pelem junction - Urip Sumoharjo street and back to Pasar Gede. After paraded, the residents were fighting for kue keranjang or the basket cakes.

Grebeg Sudiro is a mixture tradition of Chinese and Javanese communities. The word ‘grebeg’ is a typical Javanese tradition to welcome special days in Indonesia such as: Mulud (birth of Prophet Muhammad), Syawal (Eid’l Fitr), Eid’l Adha, and Suro (Javanese New Year).The peak of the Lunar New Year celebration, when the fighting for gunungan which is arranged to form a mountain. The moment was based on Javanese ‘ora babah ora mamah’ philosophy which means, no effort, no eat. Meanwhile, the shape of the mountain according to the Javanese people’s belief means gratitude to the Almighty God.

Grebeg Sudiro Tradition is held annually in Sudiroprajan area. Sudiroprajan is an urban village at Jebres subdistrict, Solo. In this region, ethnic Chinese have inhabited for decades and settled alongside the Javanese community. As the time goes by, there was a marriage between the two ethnic groups, then born a new generation. To show the acculturation between the two ethnics, then they held a new tradition called Grebeg Sudiro which was firstly held in 2007.