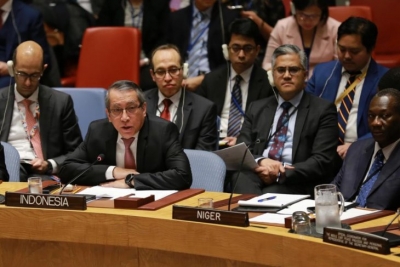 Jakarta - Indonesia and Tunisia successfully pushed for a UN Security Council (UNSC) special meeting to hear Palestinian President Mahmoud Abbas’ statement in New York, Feb 11, after announcement of a peace proposal submitted, January 28, 2020. "We call for this meeting owing to the latest developments in the Middle-East region, which can concern many parties, and affect the stability of the region and other parts of the world," Ambassador Dian Triansyah Djani, Indonesia's permanent representative to the United Nations in New York, was quoted as saying in a statement issued by the Indonesian Foreign Ministry in Jakarta on Wednesday. The meeting, initiated by Indonesia and Tunisia, was an implementation of the decisions of the Arab League ministerial-level meeting and the Organization of Islamic Cooperation (OIC) last week. Palestinian President Mahmoud Abbas and Secretary General of the Arab League Ahmed Aboul Gheit were present at the meeting. During the meeting, UN Secretary General Antonio Guterres stressed the world body’s position over the Israeli-Palestinian conflict based on a two-state solution in accordance with various resolutions of the Security Council and the UN General Assembly. At the meeting, the Indonesian government expressed Indonesia's full support for Palestine while recalling the role of the United Nations, especially the UNSC, to do the right and fair thing for the Palestinian people. "Let me reiterate the solidarity and full support of the Indonesian government and people for the Palestinian struggle," Ambassador Djani told the Palestinian President. In his speech, he reiterated Indonesia's clear and consistent stance in supporting the fight for Palestinian independence, as such a stance is firmly rooted in the mandate of the Indonesian Constitution. To this end, the Indonesian government is consistent in resolving the two-state solution and condemning various Israeli actions that continue to occupy the Palestinian territories that could have an impact on efforts to achieve peace. Furthermore, the Indonesian government considers it crucial steps to restart credible multilateral dialogue and negotiations between related parties and stresses that any practical solutions to this end must not be in conflict with the international law. The Indonesian government also reminded that the UN Security Council owes the Palestinian people a sustainable solution to the humanitarian situation of the Palestinian people that is quite alarming. In accordance with the mandate of the 1945 Constitution, Indonesia will continue diplomacy efforts at the United Nations to encourage the fulfillment of the rights of Palestinian people.   In the meantime, Fadli Zon, Indonesian legislator from Gerindra Party, and Turkish lawmaker Nuredin Nabaty were appointed as vice presidents of the World Parliament League for Al-Quds (Palestine) during the 3rd World Parliament League Conference for Al-Quds, Palestine, held in Kuala Lumpur, Malaysia, on Feb 8-9, 2020. (ANTARA)