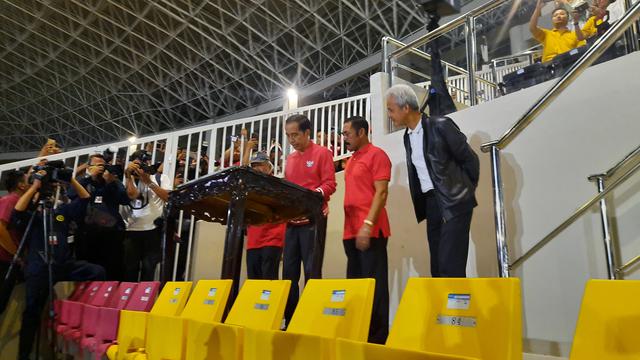 President Joko Widodo in Solo on Saturday (17/2) inaugurated Manahan Stadium following its renovation to become an international standard stadium being prepared to host U20 World Cup in 2021. As quoted by Antara, President Joko Widodo was accompanied by First Lady Iriana Joko Widodo, Minister of Public Works and Public Housing, Basuki Hadimoeljono, Governor of Central Java, Ganjar Pranowo, and Mayor of Surakarta, F.X. Hadi Rudyatmo during the inauguration ceremony. The stadium is now a magnificent stadium and much better than before. The President also remarked that the stadium is expected to be one of the hosts of the U-20 World Cup in 2021. Mayor Rudyatmo added that the stadium was renovated from 2018 to September 2019 with a budget of around Rp301 billion. He also affirmed the readiness of the Solo Government to hold the sporting event. (Ant)

More in this category: « Jinping Phones Jokowi to Express Confidence to Overcome Coronavirus Security in 135 Indonesia's Gates Tightened over Coronavirus: Minister »
back to top
Home