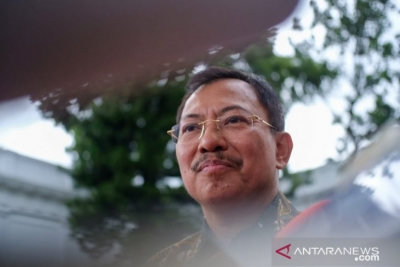 Jakarta - Indonesian Health Minister Terawan Agus Putranto confirmed he yet awaits comprehensive information on a Japanese, who tested positive for Covid-19 -- a new type of coronavirus -- after returning from Indonesia. "I am still awaiting details from the Japanese authority, as it is related to epidemiological data. It is about where he was going. Is it true that he has been here (in Indonesia), then in that case which Indonesian area he had visited, how long he had been examined in Japan, and what symptoms he had experienced. All information must be provided in detail," Minister Putranto emphasized in Jakarta on Monday. Earlier, Japan's NHK News Agency had reported that a 60-year-old Japanese resident had tested positive for Covid-19 after traveling from Indonesia. "If the news is only about he has ever been somewhere, it is the same cases as in Malaysia and South Korea. Hence, we have to be careful in responding to it since the details are important. I, as the minister of health, will only rely on detailed data," he stated. According to the NHK report, the Tokyo metropolitan government announced on Saturday (Feb 22) that a 60-year-old male resident of Tokyo was infected with Covid-19. The man, a staff member of a nursing homecare facility, had visited a healthcare institution on February 12 after becoming symptomatic with cold but returned home the same day, as he was not diagnosed with pneumonia. He then reportedly traveled to Indonesia for a family vacation on February 15, 2020. However, the NHK report did not mention the exact location or area in Indonesia that the Japanese man had visited. After returning from Indonesia, the man was admitted to a hospital in Tokyo over severe dyspnea on February 19, 2020, and had tested positive for coronavirus and confirmed to be in "serious condition". (ANTARA)