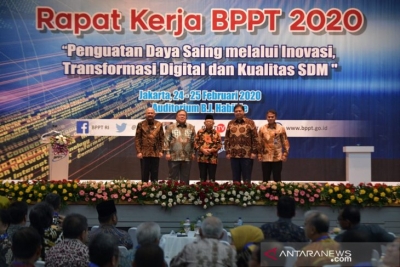 Jakarta - Indonesia's research funding has reached Rp27 trillion which is much higher than those of the Philippines and Vietnam, but it just has 89 researchers for every one million, Vice President Ma'ruf Amin said. Compared to Vietnam whose research funds are recorded at Rp24 trillion, the number of researchers that Indonesia currently possesses remains lower than that of the country, he told participants of the Agency for the Assessment and Application of Technology's (BPPT's) working meeting in Jakarta on Monday. Referring to the 2019 Global Innovation Index, Vietnam has 673 researchers in every one million people, he said, adding that Indonesia ranked 85 out of 129 countries across the world, and among the ASEAN member states, it ranked second-last in research. The worst indicator of this reality was related to institutional weakness, according to the Vice President. The large amount of research funds that Indonesia has reveals the government's seriousness in placing science and technology as an essential aspect of the country's national development, he said. The BPPT was expected to be able to make innovations that meet the people's needs because one of the measures of this agency's success was that its technological innovations were applied in society, he said. As a science and technology institution, the BPPT must be able to function well in the assessment and application of science and technology, Amin said. The low quality of Indonesia's human resources has partly contributed to the weakness of the country's innovations, Research and Technology Minister/Head of National Research and Innovation Agency (BRIN) Bambang Brodjonegoro opined. Indonesia has yet to meet the standards commonly applied in developed countries. "We talk about PhD-based researchers, the ratio of researchers to population, and the productivity of researchers," he said. In improving the quality of research and innovation, Indonesia's human resources in research and technology must seriously be developed because researchers are the primary source of innovations, Brodjonegoro said. Therefore, simplifying the research-related bureaucracy is a dire need because research cannot be developed with structural stages and complicated bureaucracy, he said. In his second term, President Joko Widodo (Jokowi) pledged to focus on improving the quality of Indonesia's human resources amid fierce competition among nations in this digital era. His seriousness is obvious as revealed in the government's statement on the bill on the state budget for the 2020 fiscal year and its financial note that he delivered at the House of Representatives (DPR) plenary session on August 16, 2019. He believes that the power of improved quality of human resources would enable Indonesia to actualize its vision to be a developed country, Jokowi said. However, in innovation, Indonesia has yet to be part of global innovation networks. (ANTARA)

More in this category: « Minister Awaits Detailed Information on Covid-19 Positive Japanese Voice of Indonesia and Dompet Dhuafa Hold Diplomatic Forum Talk Show on Freedom of the Press, A Tribute to BJ Habibie »
back to top
Home