The Equator Monument in West Kalimantan 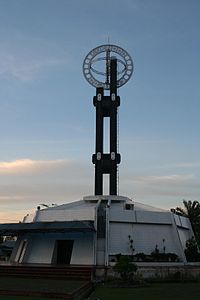 Pontianak City is identical with the equator. The city becomes one of the cities, which is passed by equator line. There are 12 countries in the world which are passed by the equator. But, Pontianak City is the only one city which rightly separates northern and southern hemispheres. You are exactly at the point when visiting Equator Monument.

Until now, every March 21-23 and September 21-23, the monument is the location of the Sun Culmination Day. At that time, the sun will be exactly above the equator. When this natural phenomenon takes place, the shadow of the monument and the surrounding objects will disappear for a few seconds. This is the unique attraction for tourists who visit.

The Equator Monument is an historical icon of Pontianak City. It was built by a geography expedition team led by a Dutch geographer in 1928 by using astronomy.

The measurement conducted by the experts at that time was without modern equipment such as satellite or GPS. They were only based on the uneven or wavy lines and  natural objects such as constellations.

Then, the monument was renovated several times. First, in 1930, the renovated parts were in milestones, circles and arrows. Second in 1938, it was restored by Indonesian architect, Frederich Silaban.

The Equator Monument is located on Jalan Khatulistiwa, North Pontianak district in West Kalimantan. To go to the monument can be accessed around 30 minutes from downtown of Pontianak by car or motorcycle.  Visitors do not need to pay the ticket to enter the monument.

More in this category: « Nunsui Beach in East Nusa Tenggara Kangean Islands in East Java »
back to top
Home