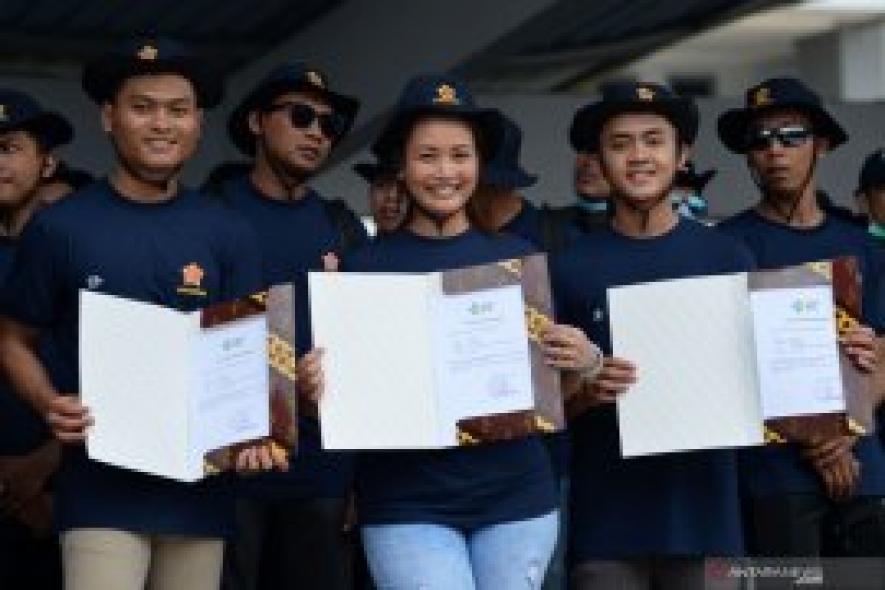 Jakarta (ANTARA) - Indonesian Health Minister Terawan Agus Putranto on Saturday handed over health and coronavirus-free certificates to 188 crew members of the World Dream cruise ship who had completed their 14-day quarantine in Jakarta's Sebaru Kecil Island. He urged them to share tips on how to face the novel coronavirus disease (COVID-19) after returning to their respective hometowns and are reunited with their relatives and friends.

These World Dream's 188 crew members left the Sebaru Kecil Island, part of Jakarta, Saturday morning boarding the Indonesian Naval Ship KRI-Semarang 594 to the pier of the Military Naval Command (Kolinlamil) in Tanjung Priok, North Jakarta.
At the pier, the crew members were received by representatives of their regional administrations.
One of the World Dream cruise ship's crew members named Vidya told journalists that "being passionate about staying healthy" has become the motto for her and her colleagues during their stay in Jakarta's small island.
"What is important for us during the observation period is that we have the passion to stay healthy and keep clean," said the 40-year-old woman.
The government provided Vidya and her colleagues with buses to take them to destinations such as the Halim Perdanakusuma Airport and Soekarno Hatta International Airport since several of them would depart for their hometowns Saturday afternoon and evening.

Several others were dropped off at hotels or homes of relatives while awaiting departure for their homes, he stated, adding that he did not wish to divulge the names crew members and addresses of the homes of their families or hotels where they are staying in Jakarta.

"However, if they are willing to give out information about that and their experience, that is their choice," Director of the Disaster Mitigation and Fire Management Directorate General of Regional Administration Affairs at the Home Ministry Safrizal ZA said.
"The government does not disseminate information that tampers with the confidentiality of any individual's privacy. However, if they want to share their experiences, they can do so," he added.

Some 60 percent of the 188 crew members are from Bali Province. They worked as chefs on the World Dream cruise ship.

The Indonesian government has selected Sebaru Kecil Island as the quarantine site for 188 Indonesians from the World Dream liner and 69 Indonesians employed as cabin crew members of the Diamond Princess cruise liner suffering from COVID-19.
COVID-19, which firstly struck in the Chinese city of Wuhan at the end of December 2019, claimed at least 4,500 lives and infected over 120 thousand people worldwide. In Indonesia, the virus has infected 69 people and killed four.
Taking into account the increasing death toll and the spread of this virus, the World Health Organization (WHO) has declared the coronavirus outbreak a global pandemic.
The Indonesian government has put in place precautionary measures since the early stage of the coronavirus outbreak that first struck the Chinese city of Wuhan at the end of December 2019.

In addition to installing thermal scanners at the country's airports and seaports, as well as making preparations at hospitals across the archipelago, the Indonesian government has repatriated several hundred citizens.

On February 2, a total of 238 Indonesian nationals were airlifted from Wuhan, China, to be quarantined in Natuna District's Riau Islands Province. All these Indonesians were found to be healthy and were reunited with their families.
On March 2, 2020, President Jokowi announced that two Indonesians had tested positive for COVID-19. The number of infected confirmed by the government tended to steadily rise over the past days.  (antara)