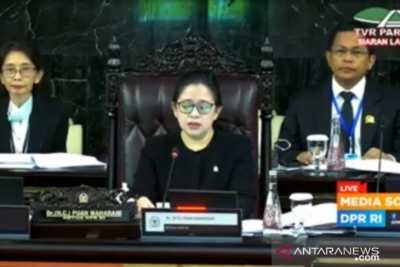 A screengrab of Speaker Puan Maharani (center) opening the third session of the House of Representatives for the 2019 to 2020 period on Monday (March 30, 2020) in Jakarta ANTARA

Indonesia’s House of Representatives opened its third session for 2019-2020 with a plenary meeting here on Monday amid a work-from-home guidance issued by the central and local authorities for the past two weeks. The meeting was attended by 45 legislators, while 279 others participated in the session via video conferencing. The legislature is located in Senayan, which is the epicenter of the current COVID-19 outbreak in Indonesia. The House of Representatives had earlier extended its recess from March 22 to March 29 before finally deciding to open the third session. "By saying Bismillahhhirahmanirrahim (in the name of Allah, the beneficent, the merciful), I, as the Speaker of Indonesia's House of Representatives, announce to all Indonesian people that the third meeting session for the 2019 to 2020 period is officially starting today, March 30, 2020," House Speaker Puan Maharani said in her speech in Jakarta, Monday. “Forty-five members of the House of Representatives are here in person, while 279 others are in their homes, attending the plenary meeting virtually," Maharani stated. Though they were in the same room, the legislative members practiced social distancing by sitting far apart from each other. The Jakarta Provincial Government had recorded a total of 720 COVID-19 cases as of Monday, with 48 people recovering from the viral infection and 76 succumbing to it. Meanwhile, the Indonesian Government on March 30 reported 1,414 confirmed cases, and said 75 patients had recovered from COVID-19. The death toll was recorded at 122. (ANTARA)