No Plan to Release Corruption Inmates over COVID-19 Fears: Jokowi 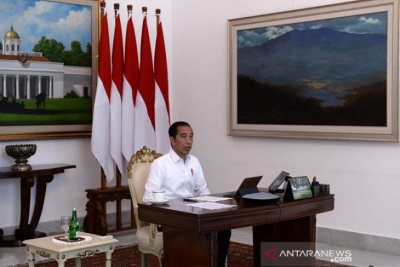 President Joko Widodo (Jokowi) at a virtual limited meeting on COVID-19 in the Merdeka Palace, Jakarta, on Friday (April 3, 2020) ANTARA/HO-Press Bureau of the Presidential Secretariat/Kris/aa/sh

President Joko Widodo (Jokowi) clarified that inmates convicted in corruption cases were barred from being released as part of the measures to curtail the risk of mass coronavirus transmission in overcrowded detention facilities. "I want to stress here that during our meetings, prisoners convicted for corruption never featured in the discussions. Hence, Government Regulation No. 99 of 2012 has not been revised," the president stated at the Bogor Presidential Palace in Bogor, West Java, on Monday. Jokowi made the statement at a virtual limited meeting held to discuss the report of the COVID-19 task force, in which the attendees comprised Vice President Ma'ruf Amin, cabinet ministers, and head of the Task Force for Acceleration of COVID-19 Handling Doni Monardo, concurrently head of the National Disaster Mitigation Agency (BNPB). "Only prisoners convicted of general crimes can be released," he remarked. Jokowi cited the example of some other countries that had also adopted the same approach to avoid mass transmission of coronavirus in their prisons. "I saw Iran has released 95 thousand prisoners; Brazil, 34 thousand; and other countries too have adopted the same measure," he pointed out. He admitted that Indonesia's prisons were overcrowded, thereby raising the likelihood of mass COVID-19 transmission. "Last week, I had agreed to release inmates over the high risk of further spread of COVID-19 in our overcrowded prisons," he stated. However, only prisoners meeting certain requirements would be released. "There are some conditions, and they will be monitored," Jokowi added. The justice and human rights minister passed a new decree that allows the release of 30 thousand prisoners, including juvenile delinquents, to avoid mass coronavirus infections in Indonesia's overcrowded jails. The move is also expected to save some Rp260 billion of the state budget. The ministerial decree allows the release of only petty criminals and not inmates convicted for more grave crimes, including corruption, illegal logging, terrorism, drug crimes, gross human rights crimes, or transnational organized crimes. People sentenced to five to 10 years for drug use and who have served at least two-thirds of their sentence will also be released. Drug kingpins sentenced for over 10 years are barred from being released. (ANTARA)