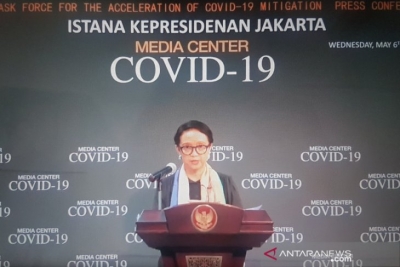 As many as 92 foreign nationals in Indonesia have tested positive for COVID-19, 314 are under surveillance, while 164 have recovered from the infection as of May 5, 2020, the Foreign Ministry reported.

The diagnosis of three more foreigners is yet to be confirmed. Meanwhile, so far, 17 foreigners have died of the virus, Foreign Minister Retno Marsudi stated during an online media briefing in Jakarta on Wednesday.

The government arrived at the figure after identifying 590 COVID-19 cases involving foreign nationals.

Marsudi remarked that the Foreign Ministry has maintained constant communication with the embassies of the foreign nationals in Indonesia to keep them abreast of the condition of their health.

The Indonesian Government officially announced the country's first confirmed coronavirus case on March 2 this year. The central and regional governments have since then made persistent efforts to flatten the coronavirus curve by imposing healthcare protocols and social restrictions.

Large-scale social restrictions have been enforced in several cities, including Jakarta, Bogor, Depok, Tangerang, Bekasi, and Pekanbaru, to break the chain of COVID-19 transmission.

The central government has also banned homebound travel, locally known as ‘mudik’, during the fasting month of Ramadhan and the Idul Fitri holiday season. (ANTARA)

More in this category: « COVID 19 Update in Indonesia, May 6, 2020 President Targets Decrease of Covid -19 Curve in May »
back to top
Home