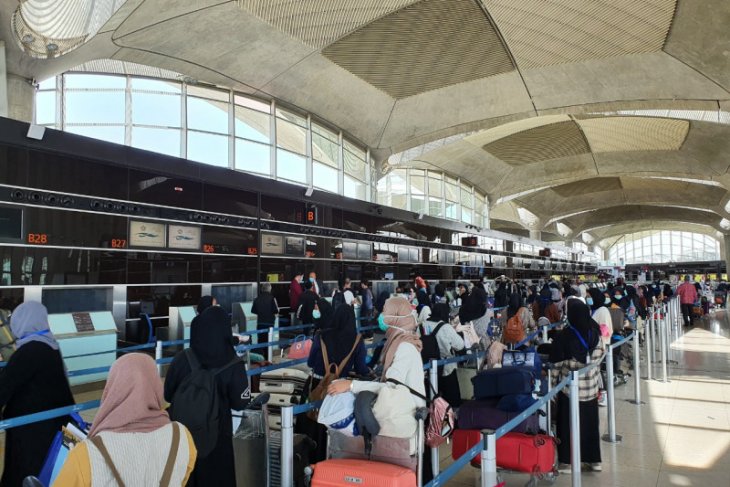 As many as 74 Indonesian citizens departed from the Queen Alia International Airport in Amman, Jordan's capital city, on Sunday (May 31, 2020), by boarding Qatar Airways' QF-956 flight and arrived in Jakarta on Monday (June 1, 2020). (ANTARA/HO-KBRI Amman)

Some 74 Indonesian citizens departed from the Queen Alia International Airport, Amman, Jordan's capital city, on Sunday, aboard Qatar Airways flight QF-956 and landed at the Soekarno Hatta International Airport in Cengkareng, Banten Province, Monday. This self-initiated repatriation, involving students of the Nurul Fikri Islamic Boarding School, members of the Jamaah Tabligh congregation, and university students, who completed their studies, was facilitated by the Indonesian Embassy in Amman. The returnees belonged to the Indonesian Embassy's second batch of the self-initiated repatriation mission, while the first batch of Indonesians affected by the ongoing global pandemic of the novel coronavirus disease (COVID-19) had returned home in April. "In ensuring the state's presence since the onset, the Indonesian Embassy in Amman has facilitated the repatriation process based on its authority to ensure that our citizens can return home safely," Indonesian Ambassador to Amman Andy Rachmianto remarked. Ambassador Rachmianto also bore witness to the departure of 74 Indonesians. The embassy, in cooperation with Qatar Airways, conducted the self-initiated repatriation of the second batch on Sunday. "May this COVID-19 crisis soon end, so that our community members can resume their day-to-day activities in a new normal scenario," he stated. The Indonesian government has continually striven to repatriate its citizens stranded abroad amid the ongoing COVID-19 pandemic over the past few months. In Malaysia, some 4,800 undocumented Indonesian migrant workers will have been released from the country's immigration detention houses to then be repatriated to Indonesia since June 6. The Malaysian Immigration and Foreign Ministry’s officials had discussed this repatriation-related plan with their counterparts from the Indonesian Embassy on May 28, Malaysian Defence Minister Sabri Yaakob stated in Putrajaya last weekend. Prior to their repatriation, all Indonesians currently accommodated at several detention houses in the neighboring country will undergo examination using the Rapid Test Kit Antigen (RTK Antigen) method to diagnose for the presence of coronavirus.   The coronavirus disease, which initially hit the Chinese city of Wuhan at the end of 2019, has since then spread to at least 202 countries and territories, including Indonesia, with a huge spike in death toll. The Indonesian government officially announced the country's first confirmed cases on March 2 this year. The ongoing COVID-19 pandemic has weakened the purchasing power of scores of Indonesian families, particularly those who lost their jobs. (ANTARA)