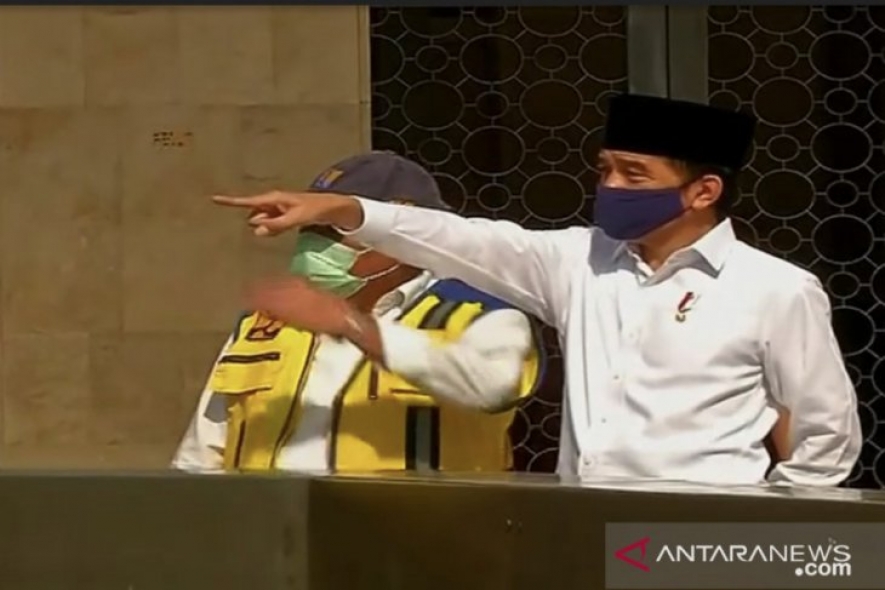 President Joko Widodo examined the readiness of Istiqlal Mosque to apply standard procedures for the new normal. "This morning I returned to Istiqlal Mosque to review the progress in the massive renovation of Istiqlal Mosque," President Widodo stated at the courtyard of Istiqlal Mosque in Jakarta on Tuesday. President Widodo, in a blue mask, toured the mosque and its courtyard in the company of Public Works and Public Housing (PUPR) Minister Basuki Hadimuljono and Grand Imam of the Istiqlal Mosque Nasaruddin Umar. "To date, the renovation has reached 90 percent completion. God Willing, renovation will be completed in early July," the president stated. The head of state acknowledged that the renovation of Istiqlal Mosque did not proceed as expected owing to the COVID-19 pandemic. The president noted that the Grand Imam of Istiqlal Mosque will take the decision on reopening the largest mosque in Indonesia after renovation. "We have yet to decide on whether to reopen Istiqlal Mosque. Based on information from Istiqlal Mosque’s Grand Imam Prof. Nasaruddin, Istiqlal Mosque is planned to be opened in July. The decision is taken by the grand imam of Istiqlal Mosque," the president remarked. The president also emphasized the need for Istiqlal Mosque to make requisite preparations to apply health protocols established by the government for the opening of houses of worship during the new normal period. Places of worship are required to follow 11 rules if they plan to conduct religious activities, with the first being to prepare officers to conduct and oversee the implementation of health protocols at places of worship. The second rule pertains to conducting periodic cleaning and disinfection of places of worship. The third rule calls to limit the number of doors and lanes in and out of the places of worship to facilitate the application and supervision of health protocols, while the fourth rule necessitates the provision of handwashing, soap, and hand sanitizer facilities at entry and exit points of places of worship. The fifth rule entails providing temperature screening tools at the entrances of houses of worship. If the body temperature of a worshiper is found to be higher than 37.5 degrees Celsius after checking twice within a five-minute gap, then entry will not be allowed into the house of worship. The sixth rule involves applying distance restrictions by applying special markings on the floors and seating arrangements, with a minimum distance of one meter, while the seventh rule calls to make arrangements for the number of worshipers congregating at the same time to ensure adherence to the minimum required distance between them. The eighth rule necessitates cutting short the time of worship without reducing provisions for fulfilling all worship-related activities. The ninth rule is to put up an appeal for the application of health protocols in places of worship at locations that are easily visible. The 10th rule involves making a statement of readiness to apply the prescribed, while the 11th rule calls to implement health protocols specifically for the congregation of guests coming from outside the house of worship. (ANTARA)