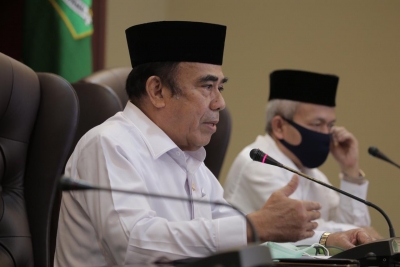 "The government has decided not to send the hajj pilgrims in 1441 Hijr or 2020. I convey this decision through the Decree of the Minister of Religious Affairs of the Republic of Indonesia Number 494 of 2020 concerning the Cancellation of the Departure of the Hajj Pilgrimage for 1441 Hijr or 2020. In accordance with the mandate of the Law, in addition to economic and physical capability requirements, health and safety of the pilgrims must be guaranteed and prioritized, starting from the embarkation or debarkation, in travel, and also while in Saudi Arabia," said Fachrul Razi.

In addition to the safety issues, the Minister of Religious Affairs Fachrul Razi also said, this policy was taken because until now the Saudi Arabian government has not opened access for the 1441 Hijr Hajj Pilgrimage Services. As a result, the Indonesian Government does not have enough time to make preparations for the implementation of guidance, service and protection for pilgrims. He said the preparation is important so that pilgrims can hold worship safely and comfortably.

Fachrul Razi added that following the issuance of the cancellation policy for the departure of the pilgrims, regular and special pilgrims who had paid the Hajj Travel Costs (Bipih) this year would become pilgrims of next year’s hajj. The cost payments that have been paid will be kept and managed separately by the Hajj Financial Management Board (BPKH). (VOI / AHM)

More in this category: « Houses of Worship Reopen, albeit with Stringent Procedures: Jokowi Government to Quickly Execute Suitable Economic Recovery Programs »
back to top
Home