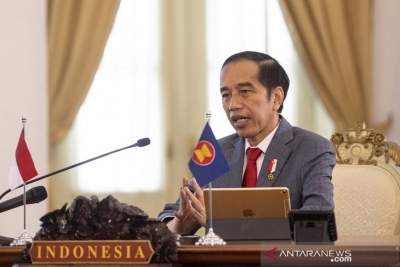 President Joko Widodo attended the 36th ASEAN Summit, which was held virtually, from the Presidential Palace in Bogor, on Friday, June 26, 2020. ANTARA

Indonesian President Joko Widodo (Jokowi) has said he is optimistic that ASEAN will overcome the coronavirus pandemic as the region has built a strong foundation in community organization over decades."The President said that with such a strong community foundation, that has been built over some five decades, ASEAN is likely to survive this tough period and (handle) the changed situation," Minister of Foreign Affairs, Retno Marsudi, told the press on Friday after accompanying Jokowi for the 36th ASEAN Summit, which was held virtually.At the meeting, Jokowi said the world, including ASEAN countries, is currently facing two big challenges related to the handling of the outbreak as well as its social and economic impact, and things have become more complicated due to rivalry among world powers.“A pessimistic view towards multilateralism has been growing, while the rules-based order is getting violated as the geopolitics have changed. (At the meeting) The President emphasized ASEAN's role in navigating this change," Marsudi noted.At the high-level meet, secretary general of ASEAN, Dato Lim Jock Hoi, raised several significant points, including the COVID-19 pandemic contributing to the first economic contraction in ASEAN in 23 years, as Marsudi said.However, Lim lauded ASEAN members, saying countries in the region have made a quick and determined response, as well as solidified coordination with partners during the ASEAN Plus Three Summit in April, which resulted in further talks on the regional pandemic response fund. (ANTARA)

More in this category: « President Joko Widodo Considers Banyuwangi the Most Ready to Face the Pre-Condition of the New Normal New COVID-19 Recoveries for First Time Exceed 1,000 in Indonesia »
back to top
Home