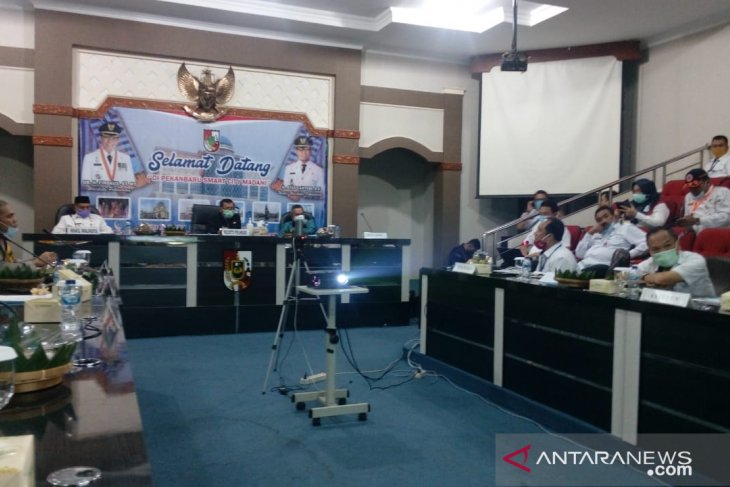 The Pekanbaru city government officials evaluated the third phase of enforcement of large-scale social restrictions on May 27, 2020 . (ANTARA/Vera Lusiana)

Some 40 businesspersons and residents in Pekanbaru, Riau Province’s capital, received warning letters from the city administration's public order agency (Satpol PP) for violating preventive measures necessitated under the government's COVID-19 protocols.Hoteliers and owners of amusement centers were among the businesspersons found violating the COVID-19 protocols, Chief of the Pekanbaru City Public Order Agency Agus Pramono noted in a press statement received by ANTARA in Jakarta, Saturday.The warning letters were sent since they failed to provide handwashing facilities to their customers. They also did not remind their visitors to practice physical distancing measures and wear face masks during the enforcement of the transitional period towards a "new normal"."We monitor the business entities that have received our warning letters. If they overlook the warnings, their business permits will be revoked. The citizen identity number (NIK) of individuals found violating the COVID-19 protocols will be blocked," he cautioned.Pramono called on Pekanbaru’s residents to adopt a disciplined approach in applying preventive measures mandated by the COVID-19 protocols to break the chain of the ongoing coronavirus pandemic.As of June 26, Indonesia has had 51,427 confirmed COVID-19 cases since the government officially announced its first confirmed cases on March 2, according to the Indonesian Ministry of Health as reported by spokesman for COVID-19 handling Achmad Yurianto.Of the total number of confirmed cases, 21,333 were discharged from hospitals, while 2,683 others succumbed to the deadly virus.Coronavirus infections initially surfaced in the Chinese city of Wuhan at the end of 2019.Since then, COVID-19 has spread to over 215 countries and territories, including 34 provinces of Indonesia, with a massive spurt in death toll.The Indonesian government officially confirmed the country's first cases on March 2 this year. The COVID-19 pandemic is undeniably a huge crisis in human history that has caused a global economic crisis.Indonesian President Joko Widodo (Jokowi) stated on Thursday that several nations were bearing the brunt of the ongoing global novel coronavirus disease (COVID-19) pandemic.The International Monetary Fund has projected several countries to experience an economic contraction this year.The US economy was forecast to contract up to minus eight percent, while those of Japan, the UK, France, Italy, Spain, and Germany would decline to -5.8 percent, -10.2 percent, -12.5 percent, -12.8 percent, - 12.8 percent, and -7.5 percent respectively. (ANTARA)