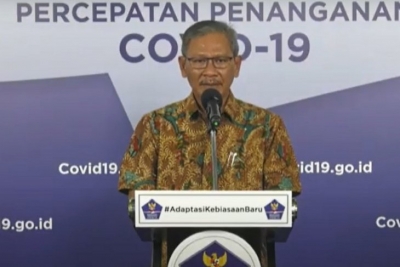 Indonesia for the first time recorded new COVID-19 recoveries above one thousand within 24 hours, according to Achmad Yurianto, the Government's Spokesperson for COVID-19 Response."The number of patients recovering reaches 1,027, bringing the total recoveries to 22,936 so far. The number of deaths was 34, bringing the death toll to 2,754," Yurianto said at Graha BNPB building, in Jakarta on Sunday.For the first time that the number of recoveries exceeded one thousand within 24 hours. Previously, the number of recoveries was usually 500 to 800 daily, he added.Papua contributed 335 recoveries based on the data received on the previous day, he noted.The country's COVID-19 tally reached 54,010 cases, including 1,198 new confirmed cases on Sunday.The results were obtained from the examination of 17,230 specimens from the Ministry of Health's network laboratory.Yurianto explained that the number the specimens which were examined, went down because laboratories in most hospitals were closed on Saturday and Sunday. Only the Ministry of Health's network laboratories and few other laboratories remain open for seven days a week.East Java Province added the highest number of fresh cases, notably 330 and 101 recoveries.Following East Java, was South Sulawesi with 192 new cases and 60 recoveries, Central Java 188 new cases and 14 recoveries, Jakarta 125 new cases and 255 recoveries, and South Kalimantan 73 new cases and 80 recoveries."Today, 20 provinces report fresh cases below 10, and nine provinces have no new cases," he said.On June 25, President Joko Widodo (Jokowi) paid a working visit to East Java to review the COVID-19 response in the province.He called on the Health Ministry and the Task Force for the Acceleration of COVID-19 Response to send face masks to East Java to curtail the transmission of the novel coronavirus.President Jokowi received a report from the East Java COVID-19 Task Force that said 70 percent of citizens in the area had yet to wear masks.To this end, the Indonesian leader invited religious and public figures to constantly remind the people of the criticality of following health protocols, especially in terms of wearing masks, keeping physical distance and frequent hand washing.