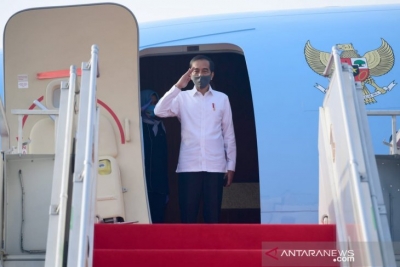 President Joko Widodo (Jokowi), on Tuesday, departed for Central Java to inspect the COVID-19 handling and countermeasure post in Semarang and the Batang integrated industrial area.President Jokowi will also directly observe labor-intensive projects in Batang District and export-oriented furniture factories in Demak District, Central Java, on Tuesday.According to information from the Press Bureau of Media and Information of the Presidential Secretariat in Jakarta on Tuesday, the head of state and his entourage departed from the Halim Perdanakusuma Air Force Base, Jakarta, aboard the Indonesia-1 Presidential Aircraft at 8:10 WIB."Upon arrival at the Ahmad Yani International Airport, Semarang City, the president headed straight to the COVID-19 Central Java Province handling and management post at the Gradhika Bhakti Praja Building, Central Java Governor's Office Complex," according to the presidential secretariat.At the Gradhika Bhakti Praja Building, the president will deliver several instructions through a videoconference for the integrated handling of COVID-19 in Central Java.After a visit to the COVID-19 handling post, Jokowi will head to the Batang Integrated Industrial Zone. In addition to reviewing the place, Jokowi will also bear witness to a presentation on channeling of foreign investment into Indonesia.The head of state will thereafter continue his working visit by observing labor-intensive projects in Batang District. During the inspection, the president will be accompanied by Minister of Public Works and Public Housing Basuki Hadimuljono.In the afternoon, Jokowi and his entourage were scheduled to observe an export-oriented furniture factory in Demak District. After this visit, the president will head to the Ahmad Yani International Airport, Semarang City, from where he will then take off to the Halim Perdanakusuma Air Force Base, Jakarta.Based on data from the Task Force for the Acceleration of COVID-19 Handling, Central Java recorded a total of 3,680 COVID-19 positive cases as of June 29, 2020, of which 1,109 were declared cured, while 150 others succumbed to the disease.Minister of State-Owned Enterprises Erick Thohir, Cabinet Secretary Pramono Anung, Head of the National Disaster Mitigation Agency Doni Monardo, and Head of Presidential Secretariat Heru Budi Hartono, among others, accompanied the president on flights to Central Java. (ANTARA)

More in this category: « BKPM Should Be All-Out to Fulfill Investors' Requirements: Jokowi Regions with Low COVID-19 Cases can Apply New Normal: Jokowi »
back to top
Home