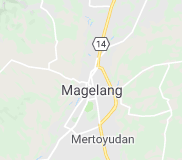 Cracker or Krupuk is a kind of snack which is generally made from tapioca flour dough mixed with flavorings, such as shrimp or fish. The crackers are made by steaming dough until cooked, then thinned slice, dried in the sun rise and fried with cooking oil. The texture is crispy and usually used as a complement of various foods in Indonesia. Not only fried, it can also processed into a delicious meal called Capjae Kerupuk.Capjae Krupuk is a typical food of Magelang people, Central Java. The main ingredient of capjae krupuk is made from wheat flour. To make Capjae Krupuk, it is usually used onion crackers, shrimp crackers, and others. To make the food is not complicated. The raw crackers is firstly soaked in boiled water overnight. Then, the crackers were washed and then drained. Some spices such as garlic, hazelnut, pepper, and chili are smoothed first. Then the spices mixture is sauted with soy sauce, cabbage and onions, including raw crackers. Currently, people  making the capjae krupuk by adding more other ingredients, such as chicken meat, meatballs, sausages and carrot.Capjae is very delicious taste. The culinary is better to eat in warm, which can be eaten in a single menu or for side dishes. Usually, the Magelang people enjoy Capjae kerupuk with warm rice porridge. For those who are interested to enjoy Capjae Krupuk, you can visit Magelang, especially Kradenan Hamlet, Ambartawang Village. You can find many sellers of Capjae Kerupuk. It is very affordable price, ranging from Rp 1,000 to Rp 2,000 per portion.

More in this category: « Saronde Island TUMIS KAPAH FROM NORTH KALIMANTAN PROVINCE »
back to top
Home