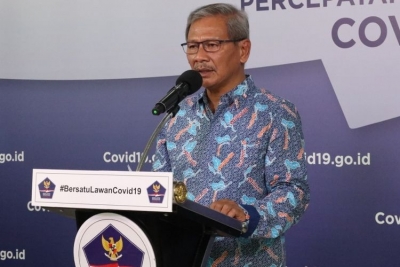 The recovery rate of COVID-19 patients in 11 provinces has exceeded 75 percent, according to Spokesman of the Indonesian Government's COVID-19 Task Force Achmad Yurianto.

"This indicates that more patients have recovered from the virus," he said in his regular press conference circulated through the National Disaster Mitigation Agency's (BNPB's) official Youtube channel on Sunday.Yurianto did not elaborate the provinces whose COVID-19 recovery rate had been recorded at above 75 percent but the task force's official website revealed them.They are Bangka Belitung Islands Province whose recovery rate is recorded at 84 percent; Central Sulawesi (84 percent), Lampung (almost 80 percent), North Kalimantan (84 percent), Riau (88 percent), Gorontalo (84 percent), and Riau Islands (78 percent).Yogyakarta's recovery rate has also stood at 84 percent and those of West Kalimantan, East Kalimantan, and West Sumatra are recorded at 83, 78, and 82 percent respectively.According to Yurianto, Indonesia's national recovery rate still stood at 45.42 percent or it remained lower than the global rate which had reached 56.71 percent.Instead, the country's mortality rate was recorded at five percent or higher than that of global level which stood at 4.72 percent, he said, adding that as of Sunday, there had been 29,105 patients who had fully recovered from this novel coronavirus disease.The death toll from the virus was recorded at 3,171 while there had been 1,607 new confirmed cases on Sunday, bringing the tally to 63,749 cases, he said.Achmad Yurianto reiterated his call for consistently practicing preventive measures as mandated by the government's COVID-19 protocols, and for changing bad habits for containing the spread of the deadly virus outbreak. (ANTARA)

More in this category: « Status Upgrade Opportunity to Emerge From Middle-Income Trap: Jokowi Indonesia-made COVID-19 vaccine will be mass-produced by mid-2021 »
back to top
Home