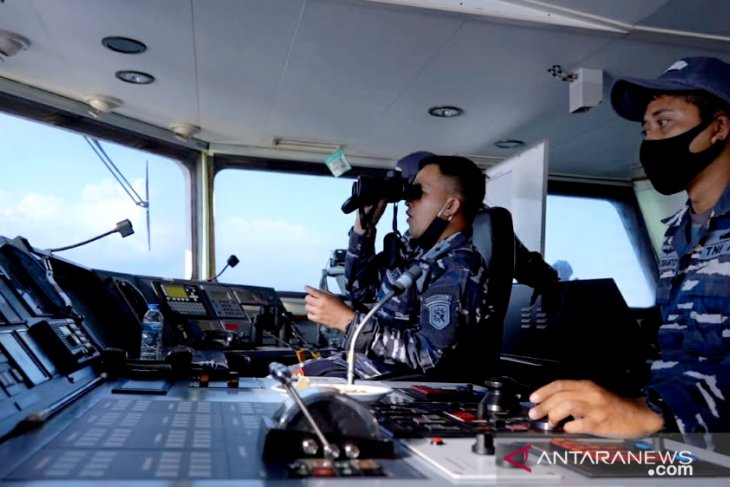 A joint exercise is conducted by the Indonesian Navy and the Indonesian Air Force in Ambalat waters, near the border of Indonesia and Malaysia on July 11, 2020. .ANTARA Foto/ HO/Dispen Lantamal VI

The Indonesian Navy and Indonesian Air Force conducted an exercise near the border of Indonesia and Malaysia.The Indonesian Navy deployed three warships -- KRI Diponegoro (DPN) -365, KRI P. Rengat (PRE) -711, and KRI Kakap (KKP) -811 -- while the Indonesian Air Force deployed a Boeing 737 aircraft from Squadron 5 of the Hasanuddin Air Force Base.The tactical cooperation at the Indonesia-Malaysia border area was monitored by Sea Combat Group Commander of the Fleet Command II First Admiral Rahmat Eko Rahardjo from KRI Diponegoro-365 in the Ambalat waters on Saturday.The exercise, involving the Navy and Air Force, was an enactment of a recommendation arrived at during a coordination meeting at the headquarters of the Air Force Operation Command II when KRI Diponegoro-365 docked at the Main Naval Base VI in Makassar.The joint activity focused on forging sound tactical cooperation between the Navy and Air Force while conducting a joint military operation to safeguard the sovereignty of the Republic of Indonesia in the RI-Malaysia border region, particularly in the Ambalat Block waters.The two-day exercise was also projected to help hone the capabilities and skills of the crew members of KRI DPN-365, KRI PRE -711, and KRI KKP -811 as well as to integrate tactical cooperation between Indonesian warships and aircraft in executing operational tasks. Tactical cooperation should constantly be established optimally between the three warships and aircraft to support the tasks of the Indonesian Navy in guarding the country's waters and the Indonesian Air Force in defending the country's air space, he emphasized.Eko expounded that the exercise had taken a cue from past historical experiences that airplanes were crucial and effective weapons in sea operations akin to what had occurred during the Pacific war, specifically the Midway battle in 1942. (ANTARA)