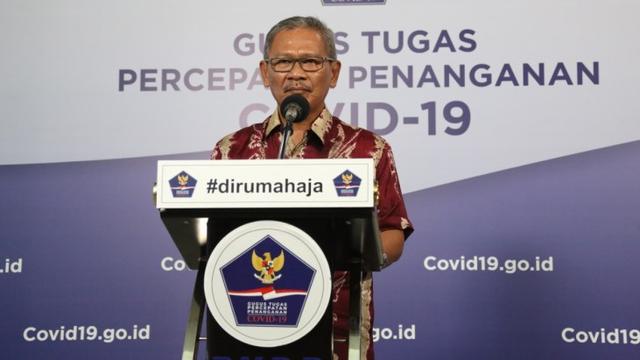 The addition of 1,671 fresh COVID-19 cases in Indonesia until Saturday noon brought the tally to 74,018, while 1,190 recoveries were reported, bringing the total to 34,719, Achmad Yurianto, government's spokesman for COVID-19 response, stated.The highest number of new confirmed cases were found in East Java Province, reaching 409, followed by 378 new cases in Jakarta, Yurianto noted at a press conference in Jakarta on Saturday.South Sulawesi Province witnessed the addition of 180 new cases, 100 in Central Java, 87 new cases in North Sumatra, 79 in South Kalimantan, and 73 new cases in West Java."Today, 18 provinces reported under 10 new cases, while no cases were recorded in the six provinces of Jambi, West Kalimantan, North Kalimantan, Central Sulawesi, Lampung, and East Nusa Tenggara," Yurianto remarked.Furthermore, Yurianto pointed to an increase in the number of patients recovering from COVID-19 in various regions, including 318 new recoveries in East Java, followed by 215 in Jakarta, 176 in South Sulawesi, 75 in South Kalimantan, 50 in Central Java, 28 in West Java, and 16 in North Sumatra.The number of patients succumbing to COVID-19 rose by 66, thereby bringing the death toll to 3,535 since the Indonesian government announced its first COVID-19 cases on March 2, 2020.Yurianto attributed the rise in COVID-19 cases principally to the failure of people to stringently follow health protocols.A research conducted by several experts indicated that those not wearing masks were responsible for the surfacing of new COVID-19 cases, according to Yurianto."This is important. Hence, we remind (Indonesians) to wear masks that are comfortable to use. Please, always wear a mask," he reiterated.  (ANTARA)