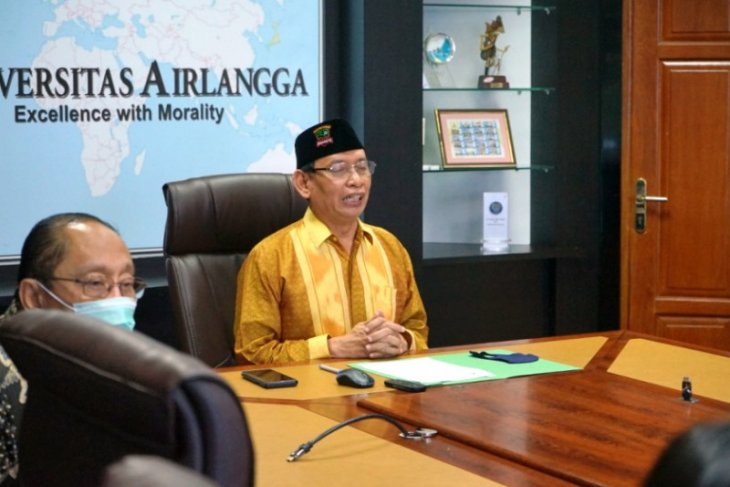 Some 17 researchers of Airlangga University (Unair) in Surabaya, East Java, officially received President Joko Widodo’s mandate to conduct research and innovation projects to expedite the Indonesian government's endeavors to handle the COVID-19 pandemic. The president's letter containing the mandate was symbolically received by Unair Rector Professor Mohammad Nasih from Head of the COVID-19 Research and Innovation Consortium Professor Ali Ghufron Mukti through a virtual event on Friday. Professor Mohammad Nasih expressed gratitude to the government for its mandate while also echoing his university's research team members unwavering commitment to partaking in the efforts to mitigate the impacts of the novel coronavirus disease (COVID-19) along with their colleagues from the Supuluh Nopember Institute of Technology (ITS). The government-sponsored research and innovation projects will prioritize four areas: prevention, filtering and diagnosis; medical equipment and supporting devices; medicines and therapies; and social humanities. "Unair remains committed to participating in the efforts to handle the COVID-19 pandemic, right from the upstream to downstream; starting from mitigation to discovery of the COVID-19 vaccine," he affirmed. Given that overseas institutions are often behind vaccine development and production, Unair will leave no stone unturned in the endeavors to develop a COVID-19 vaccine for Indonesians by using local samples. However, this project will be conducted through collaboration with overseas researchers. In connection with this program, the Indonesian Research and Technology Ministry revealed it had accrued funds reaching almost Rp200 billion for financing research on developing a vaccine, medicines, and other innovative products to support Indonesia's fight against the COVID-19 pandemic. "We believe that the funds we have collected are sufficient to finance research and innovation efforts up to the prototype stage," Research and Technology Minister Bambang P. S. Brodjonegoro noted in a statement circulated on YouTube on May 27. The funds have been sourced from LPDP's Endowment Fund for Research, universities, and the Research and Technology Ministry's agencies, including the Indonesian Institute of Sciences (LIPI), and Agency for the Assessment and Application of Technology (BPPT). The minister explained that the funds will not be utilized merely to finance Indonesian researchers' efforts to produce prototypes of products direly needed by the country to fight coronavirus, including vaccines, drugs, and health equipment. Furthermore, the ministry allotted early-stage funding of Rp5 billion to support research for COVID-19 vaccine development in the country. "Of course, we are going to channel more funds as and when required," he added. (ANTARA)

Bali to Target Tourists from Nearby Countries in New Normal 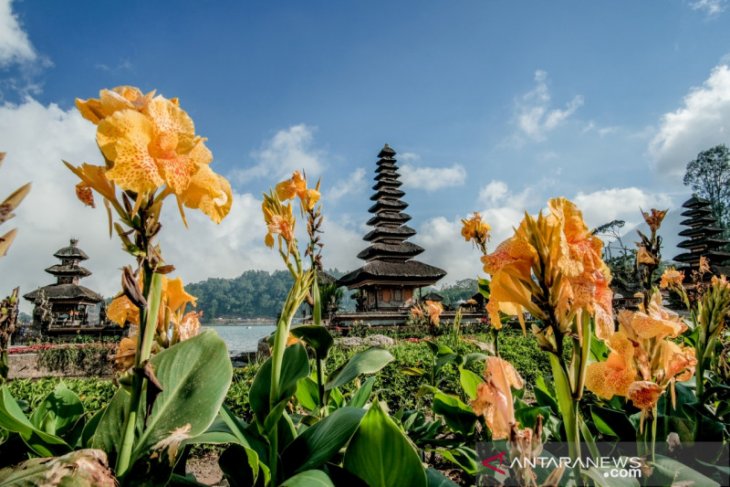 Bali’s tourism industry will target tourists from neighboring countries such as Thailand, Myanmar, and Vietnam in the new normal. (ANTARA/ Ministry of Tourism and Creative Economy Communications Bureau)

The tourism industry in Bali is planning to target travelers from nearby countries, such as Thailand, Myanmar, and Vietnam, once the province is reopened for international visitors under the new normal protocols.

The industry and all stakeholders engaged in tourism and the creative economy in Bali are currently preparing for the new normalization of tourism by implementing hygiene, health, and safety protocols, said secretary of the Association of Indonesian Tours and Travel Agencies (Bali), I Putu Winastra, in a statement received in Jakarta on Saturday.

"The protocol will be applied to every tourism sector, including transportation, accommodation, restaurants, and all tourism objects," he informed.

The protocol has been prepared based on visitors’ travel profiles, and focuses on three things: cleanliness, health, and safety.

Under the protocol, tourists planning to visit Bali would have to carry some documents, including a statement declaring them COVID-19 free, their itinerary, and details of their arrival date.

There are also health protocols and standard operational procedures that would need to be enforced when tourists arrive at the airport, during their tour, right up till they fly back to their home countries.

In terms of market segmentation, I Putu Winastra said, countries closest to Indonesia, such as Thailand, Myanmar, and Vietnam, could become the mainstay for Bali's tourism once the province is opened to the international market.

"In the beginning, we will focus on the domestic market, but when the international market opens, we expect tourists from nearby countries, such as Thailand, Myanmar, and Vietnam," he said.

“And of course, Bali will not be entirely opened just yet. A pilot project is set for the Nusa Dua area," Winastra noted.

Garuda Indonesia is ready to support the industry and government in developing tourism in Bali, once the government decides to reopen the area for tourism, he added.

"To welcome the new normalcy, Garuda Indonesia has applied the protocols of Cleanliness, Health, and Safety (CHS), and explained the requirements that must be met by those traveling by airplane," he informed.

Deputy of marketing at the Ministry of Tourism and Creative Economy, Nia Niscaya, said it is important to maintain confidence in Indonesia's image by conveying policies as well as latest information about tourist destinations in Indonesia, and help the tourism industries of Thailand, Vietnam, and Myanmar to maintain cooperative relations with Indonesia in face of the new normal.

"It is important for Indonesia to provide an update on tourism products to industries in Thailand and Indochina regarding what Indonesia has done to prepare tourist destinations to welcome returning foreign tourists in future," she said.

She further explained that the ministry has prepared a standard protocol as a guide for all tourism stakeholders in the CHS program.

"We hope that the tourism industry players in Thailand, Vietnam and Myanmar get the picture in regard to the implementation of the new normal protocol, in this case, the CHS protocol, in Indonesia, especially Bali. That way, they can provide insights regarding the manufacture and sale of Indonesian tourism products in the future," she said. (ANTARA)

The Presidential Staff Office has asked the public to maintain discipline and abide by the health protocols to support efforts to prevent a second wave of COVID-19 infections in Indonesia. "The most important thing in the new normal era is discipline and obedience of the public towards health protocols," said Main Expert Staff to the Presidential Staff Office (KSP), Donny Gahral Adian, at a virtual discussion on Saturday in Jakarta. He said he believed there needs to be supervision, dissemination of information, enforcement and regulations regarding the protocols, otherwise, it would become challenging to ensure people follow health measures in a disciplined manner. Habits that are being encouraged now were never or rarely adhered to under normal circumstances, for instance, wearing masks, washing hands religiously, and avoiding physical contact, he noted. Such measures, he said, were often overlooked in normal times, but they need to become a daily habit in the new normal era. "I think this is important because, without compliance and discipline, and supervision and enforcement (of protocols) by the central and regional governments together, it is feared that Indonesia could see a second wave of COVID-19,” he cautioned. President Joko Widodo had earlier expressed the hope the spread of COVID-19 would continue to decline in the country through efforts to discipline the public to comply with health protocols, as stipulated in the guidelines for Large-Scale Social Restrictions (PSBB). The President said the rate of COVID-19 transmission, as measured by the Reproduction Number (R0), had dropped below one in several provinces of Indonesia. The President plans to massively mobilize the National Military (TNI) and Police (Polri) forces to encourage the public to comply with the health protocols. He said the enforcement of health protocols and the deployment of TNI and Polri officers would be carried out in four provinces and 25 districts and cities that have implemented the PSBB to break the chain of COVID-19 transmission. (ANTARA)

Indonesian Ambassador to New Zealand: Indonesia to Become Part of the Economy of the Pacific Countries

Jakarta (VOI News) - New Zealand sees Indonesia as the largest economy in Southeast Asia and its closest neighbor after Australia. The Government and the people of New Zealand recognize the importance of Indonesia in the context of relations with the country, in economy, social, culture and politic. This was conveyed by the Indonesian Ambassador to New Zealand, Samoa and Tonga, Tantowi Yahya, to Voice of Indonesia in Jakarta in a telephone interview on Friday afternoon (5/6/2020). In the economic field, Ambassador Tantowi Yahya said relations between the two countries had improved. He has targeted Indonesia would become part of the economy of countries in the Pacific in the near future.

"We have a target that Indonesia must become part of the economy of the Pacific countries in the near future. And we have initiated with several programs, over the past 3 years, and the highlight of it was when we organized Pacific Expo last year in Auckland. Indonesia's economic relations are increasing. Later, when Indonesia is truly economically integrated within the Pacific countries, then we can say that what the President wants, as having been delivered by him on several occasions, to increase Indonesia’s profile and actively participate, can be economically realized," said Tantowi Yahya..

Tantowi Yahya added, the positive stance of the people and the government of New Zealand towards Indonesia had helped his role as the Indonesian Ambassador to New Zealand, Samoa and Tonga in convincing the people and governments in other Pacific countries about about the importance of Indonesia's position in the Pacific. (VOI / ADVENT / AHM)