Heartiest congratulations @jokowi on your re-election! As two large democracies, we take collective pride in successful celebration of democracy. We wish you and people of Indonesia all success under your dynamic leadership.

As our nations mark seven decades of our diplomatic relationship, I look forward to working closely with you to further deepen our bilateral Comprehensive Strategic Partnership On May 21, 2019, the General Election Commission (KPU) had made an official declaration that the presidential and vice presidential candidate pair Jokowi-Ma'ruf Amin won the majority votes in the Indonesian presidential election held on April 17, 2019.

After the announcement was made, Japanese Prime Minister Abe sent a message to Indonesian President Jokowi in which he congratulated him on being re-elected as the Indonesian president for the 2019-2024 period.

The Japanese PM was also optimistic of being able to work along with President Jokowi to intensify relations between both nations.

Apart from the Japanese prime minister, congratulatory messages for Jokowi on his re-election as Indonesia's president also trickled in from other leaders and heads of state, including Chinese President Xi Jinping and Singapore's Prime Minister Lee Hsien Loong.

Earlier, on May 21, at 1:28 a.m. local time, the KPU officially declared Jokowi the winner of the presidential election after the national vote tally concluded.

With this announcement, Jokowi has vowed to implement programs to realize greater equality and endorse social justice for all Indonesians, irrespective of their political differences.

"Let us unite in building our beloved nation and homeland for the sake of peace and welfare of our future generations---the generation of our grandchildren in the future," Jokowi emphasized. (ant) 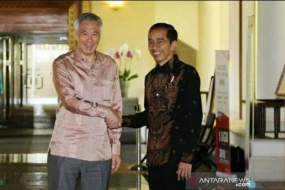 Singapore's Prime Minister Lee Hsien Loong and President Halimah Yacob penned a congratulatory letter to President Joko Widodo (Jokowi) on his re-election as president of the Republic of Indonesia. In his letter, Prime Minister Loong conveyed congratulations to Indonesian presidential candidate Jokowi on being re-elected as president of the Republic of Indonesia, on the basis of a statement from the Singapore Embassy in Jakarta on Wednesday.

"The strong mandate you received reflects the trust that Indonesians have demonstrated in your continued leadership, and your vision to uplift the lives of all Indonesians," Prime Minister Loong remarked.

During Jokowi's first term in office, the relations between Singapore and Indonesia had made notable progress.

"We jointly launched the Kendal Industrial Park in 2016 and marked 50 years of bilateral relations (“RISING 50”) in 2017. We forged close cooperation in several areas, including trade and investment, digital economy, skills upgrading, tourism, and defence and security. Our relations are in excellent shape. I look forward to working closely with you to build on what we have achieved and to explore new opportunities for cooperation, for the benefit of our people," Prime Minister Loong stated.

In the meantime, President Yacob noted that President Jokowi’s comfortable win over his rival mirrors the trust and confidence laid by Indonesians on his leadership.

"On behalf of the people of Singapore, I extend my warmest congratulations on your re-election as president of the Republic of Indonesia," President Yacob stated.

She affirmed that Jokowi' decisive victory corroborates the Indonesians' trust and in his leadership. She further expressed confidence in Jokowi's ability to build on the strong foundations of his first term to realize a better future for all Indonesians.

President Yacob highlighted the sound relations between Singapore and Indonesia, built on mutual respect and cooperation. Our people-to-people ties are deep and continue to intensify.

"I am certain that the ties between our nations will continue to deepen in the years ahead," she noted. (ant) Timor Leste and Cambodia sent delegations to learn about Indonesia’s success in preventing the stunting of children.

"The Indonesian government has made the program to prevent the stunting of pygmy children a national priority, and developed a national strategy that also supports the achievement of Sustainable Development Goals (SDGs)," said Pungkas Bahjuri Ali, Director of Community Health and Nutrition of the National Development Planning Agency, in a statement received  in Jakarta on Wednesday.

He said pygmy children are a major threat to human development in Indonesia due to their reduced productivity when they are adults.

The visit, held on 21-24 May 2019 in the framework of South-South Cooperation, was attended by government officials, consisting of nine delegates from Timor Leste led by Odete da Silva Viegas, General Director for Health Services Delivery, Ministry of Health, and eight delegates from Cambodia, led by HE Prak Sophonneary of the Cambodian State Secretariat.

The visit of the delegations of the two countries began with a workshop in Jakarta on May 20-21, led by the Ministry of National Development Planning / Bappenas and the Secretariat of the Vice President of the Republic of Indonesia. The next visit was to observe the success of West Lombok District in implementing national priorities on May 22-23.

West Lombok is one of 100 districts / cities prioritizing the prevention of stunting, and it has succeeded in reducing the prevalence of incidents from 45.9 percent in 2013 to 28.7 percent in 2018, according to the 2018 Basic Health Research by the Ministry of Health.

Data obtained from e-posyandu, a community based vehicle to improve child survival and development in West Lombok, noted that the prevalence of stunting dropped from 28.9 percent in 2018 to 25.2 percent in 2019.

Chairperson of the Policy Working Group of the National Team for the Acceleration of Poverty Reduction (TNP2K) Elan Satriawan said the implementation of multi-sector interventions needs to be brought together at the central, regional and village levels by harmonizing planning, budgeting, implementing, monitoring and controlling activities.

"Learning from experiences in various other countries, the President and Vice President are committed to directly leading the efforts to prevent stunting through comprehensive and convergent actions in order to accelerate the decline of stunting," Elan said.

While in West Lombok, the delegation saw the role and involvement of the Human Development Cadre (KPM) in prioritizing the handling of stunting in the health centers, and posyandu as the spearhead of public health services.

In addition, the group visited Community-based Water and Sanitation Management (Pamsimas) and the Family Program (PKH) in Kuripan, Lingsar and Gunungsari sub districts.

These multi-sector programs are proven to have an impact on the quality of nutrition for infants. Therefore, not only does providing access to nutritious food and other health services to people prevent stunting, but also access to clean water, as well as proper and clean latrines. (ant)