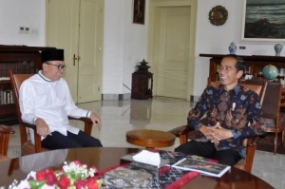 After meeting on May 2, 2019 then at the Merdeka Palace, Jakarta, the Commander of the Democratic Task Force (Kogasma), Agus Harimurti Yudhoyono (AHY), again met with President Joko Widodo (Jokowi). This time the meeting was held at the Bogor Presidential Palace, West Java, Wednesday (5/22) morning.

After the meeting with AHY reporters, the communication that was established was a form of hope that President Jokowi and the 6th President of Indonesia Susilo Bambang Yudhoyono (SBY) could continue to establish friendship and communication, especially in discussing various situations in the nation today.

"But of course because of the limitations of space and time from Mr. SBY who until now is in Singapore to accompany Ms. Ani who is undergoing blood cancer treatment, therefore President Jokowi asked me to become a bridge of communication with Mr. SBY," AHY said.

As a former president for 2 periods, according to AHY, SBY has wisdom and also certain experiences that also want to be shared, to be conveyed in order to provide support to President Jokowi in dealing with political, legal and security situations lately, especially if we see after the announcement of the results of the 2019 Election recapitulation.

After the meeting with AHY, President Joko Widodo met with the Chair of the MPR, Zulkifli Hasan. The Speaker of the People's Consultative Assembly ( MPR )  who is also the General Chairperson of the National Mandate Party has appealed to the entire community not to be easily provoked by the riots. Especially in the holy month of Ramadan, he hopes the community can hold back. Zulkifli stressed, for parties who objected to the results of the election they could sue through the Constitutional Court. ( kemensetkab and kompas )

The Head of the Public Communication Bureau of the Tourism Ministry, Guntur Sakti, confirmed that there were countries that had issued travel advice for their citizens who were in Indonesia. Travel advice was released ahead of the General Election Commission or KPU to announce the results of the election contest on May 22.

"Yes according to our monitoring, there are several countries that warn their citizens to be vigilant on May 22," Guntur said in a short message to Tempo, Saturday, May 18, 2019.

According to Guntur, the country confirmed by travel advice is the United States. The US Embassy for Indonesia proclaims the appeal through its official website.

Travel advice, he said, is a reasonable appeal and is not a threat to the sustainability of the tourist climate in Indonesia. Guntur said that travel advice is generally issued by state authorities as part of the state's obligations and responsibilities to protect its citizens.

"Even so, the security forces have also given appeals and security. We certainly hope the situation will remain conducive, "he said. The Ministry of Tourism, said Guntur, is optimistic that the tourism ecosystem in Indonesia does not shake. The performance of the tourism sector has also been recognized as being in line with the Ministry's targets and expectations since the General Election took place.

The Central Statistics Agency previously noted that foreign tourists visiting Indonesia as of March 2019 increased by 5.9 percent compared to the previous month. In that month, the number of foreign tourists reached 1.34 million.

However, when compared to the previous year or year on year, foreign tourists visited 1.82 percent for the same period. This year, the Ministry of Tourism has a target of bringing in 20 million foreign tourists until 2019. (tempo)

The Indonesian Ministry of Tourism presents border tourism and hot deal programs to attract foreign tourist visits. Speaking after the Launching of Pesona Mudik program on Tuesday, May 21, 2019 at the Ministry of Tourism, Jakarta, Tourism Minister Arif Yahya said the program is able to generate 17.6 billion Rupiah in foreign exchange.

"So the projection is how many there will be 18 million and that is relatively good at 90 percent of the total target. And the foreign exchange has been calculated to be approximately 17.6 billion. Whatever is done which is now being intensively done is the border tourism and hot deal. It turned out that we are selling the hot deal in a big discount during low season. So people especially visit Riau Islands one day and one night for only 75 dollars and with a price of less than 100 dollars. It is very easy to sell it. Last year we sold 700 thousand pax, this year we are targeting one million but the short answer is now we use the hot deal program," said Minister Arief Yahya.

Minister Arif Yahya added, to keep the destination busy on all routes in Java when there are toll roads, rest areas which will be filled with 70 to 80 percent by small and medium enterprises will be built. Meanwhile the Ministry of Tourism also appealed to the Low Cost Carrier not to use the upper limit tariff so that airplane tickets to Indonesia are cheaper. (VOI/NK/AHM) 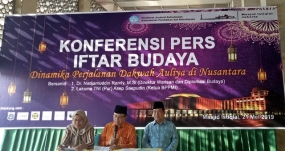 Cultural Iftar to Introduce Culture and the History of the Spreading of Islam in Indonesia.

The Directorate General of Culture of the Ministry of Education and Culture in collaboration with the Board of Management of the Istiqlal Mosque is holding a Cultural Iftar. In a press conference at the Istiqlal Mosque, Jakarta, Tuesday (21/05), the Director of Heritage and Cultural Diplomacy of the Ministry of Education and Culture, Nadjamuddin Ramly said that the purpose of Iftar Culture is to introduce more cultural values ​​and Islamic history in Indonesia.

"In order to have information, there is added value, there are additional insights, so the insight values ​​are there, from those who will stop by to see the exhibitions, that's a learning. Especially if there are school children coming, then the millennial children who don't know about Islamic history, can later be informed through the exhibitions," said Nadjamuddin Ramly.