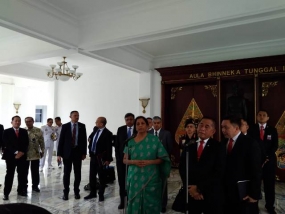 Indonesian Defense Minister, Ryamizard Ryacudu after holding a meeting with Indian Defense Minister, Nirmala Sitharaman at the Jakarta Ministry of Defense on Tuesday said Indonesia and India would strengthen the two countries' defense cooperation. Ryamizard Ryacudu said the defense industry was one of the main topics in the meeting. Defense cooperation between Indonesia and India has a legal umbrella in the form of Defense Cooperation Agreement (DCA) which was signed on January 11, 2011 in Jakarta.

The Indonesian Minister of Defense, Ryamizard Ryacudu also said that in the defense industry's strategic cooperation, Indonesia appreciates the initiation of the Memorandum of Understanding (MoU) sent by Indian companies, Bharat Electronic ltd to PT Len Indonesia. India hopes The MoU can be signed at the Indo-Defense which will take place in November 2018 in Jakarta. In principle the Ministry of Defense will continue to support efforts to strengthen the cooperation relationship between the two countries' defense industry. (VOI/Ahmad Faisal/AHM) 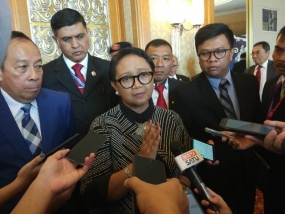 Indonesian Foreign Affairs Minister Retno Marsudi encourages the creation of global cooperation among countries in the world to face uncertainty in the world's geo-political changes. She said this at the opening of the Jakarta Geo-Political Forum on Wednesday in Jakarta. On the occasion, she said that the Indonesian government believed in the importance of cooperation compared to the dispute between countries. Some of the world challenges that are currently being faced by all countries include the rise of China and the impact of the trade war with the United States and the European Union after the UK's exit from the European Union. According to Retno, in facing these challenges, all countries in the world have no choice but to collaborate between countries.

"And facing all this we have no other alternatives but to collaborate more closely. Once again there is no better option than cooperation among nations. Our new geo-strategic principle for the future should be no longer "secure from" but "secure with". No longer ‘prosper upon' but 'prosper with'. And by having good cooperation, by strengthening global leadership, I'm sure our hope for a better world is very relevant," said Retno Marsudi.

Retno Marsudi further said, that Indonesia as a Non-Permanent Member of the UN Security Council, helped encourage the creation of a culture of dialogue between UN member states and members of the UN Security Council. Indonesia also encourages efforts to strengthen cooperation between the United Nations and regional organizations. In the Indo-Pacific cooperation framework, Indonesia also offers open, transparent and inclusive cooperation, which upholds international law.

In addition, Retno said, to deal with protectionism in the movement of the world economy, Indonesia encourages the creation of openness, justice and mutually beneficial economic cooperation between countries in the world. Indonesia even continues to intensify negotiations on various trade agreements with partner countries and new markets including Africa. (VOI/ANDY/TRANS NUKE/AHM) 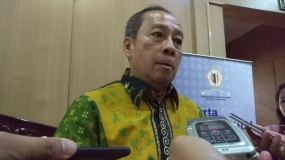 Governor of the National Resilience Institute (Lemhanas) Agus Widjojo Wednesday in Jakarta hoped that the Jakarta Geopolitical Forum could encourage efforts to build geopolitical resilience in all regions of the world. He said, the forum which carried the theme Mapping the Future of Geopolitics was also expected to create new breakthroughs in shaping the balance of interests between countries around the world. Agus Widjojo also said that with the aim of encouraging global and regional geopolitical development, the Forum held for the second time is expected to also be able to influence the changing world of governance.

“While the purpose and objective of this forum is a description of global and regional geopolitical developments as well as the impact and influence on changes in the new world order or disorder. Geopolitical recognition, all knowledge of all regions of the world. A balance of interest, rather than a balance of power,” Agus Widjojo said.

The Jakarta Geopolitical Forum is organized by the National Resilience Institute of the Republic of Indonesia. This forum was attended by a number of geopolitical experts, both from within and outside the country. Some points discussed in the one-day forum included political economy, world peace and security and humanitarian issues. Approximately 400 participants attended the forum discussing the future of the geopolitics of the world from various backgrounds including academics, practitioners, bureaucrats, entrepreneurs and politicians. The Jakarta Geopolitical Forum was officially opened by Indonesian Foreign Minister Retno LP Marsudi. (VOI/ANDY/AHM) The Indonesian government initiated the formation of new economic centers in the world. Foreign Minister Retno Marsudi, Wednesday in Jakarta explained that the spread of a new center of economic growth in the world would encourage economic equality while improving world welfare. Related to this, Retno explained, the Indonesian government is promoting the establishment of good communication between countries in the Pacific region with countries in the Indian Ocean coastal region. According to her, good relations between Pacific countries and the Indian Ocean Coast, in addition to improving world welfare, it can also encourage peace between regions.

“By connecting between Pacific and Indian Ocean we hope there will be the new growth in Indian ocean rim. Because if it happens, the new economical growth center d it means that it will increase the welfare. And welfare must be connected with peace problems and others,” Retno Marsudi said.

Regarding this matter, Minister of Foreign Affairs Retno Marsudi said that the Indonesian government is currently conducting intensive communication, not only with the Pacific Countries and the Indian Ocean Coast, but also with partner countries such as the United States, China, Russia, India, Australia and Korea. In addition, she said, Indonesia also built communication with ASEAN countries in the effort to develop the concept. She also stressed that cooperation between countries is an absolute thing that must be built compared to building competition between countries. (VOI/ANDY/TRANS NUKE/AHM)