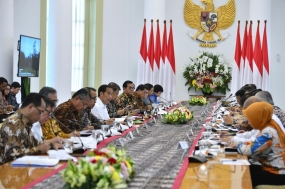 Strategies to Save Foreign Exchange Earnings 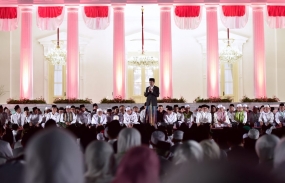 President Reminds Community of Strengthening Brotherhood in Prayer for Nation

President Joko Widodo reminded the Indonesian people of continuing to maintain the brotherhood and national unity during Dhikr and Prayer for the Nation."We often forget that our nation is a great and diverse one. We should also be grateful as it is the grace of God that unites us," the president, in his speech during an event held at the Merdeka Palace square, stated here on Wednesday night ( August 1st ).According to the president, the diversity of tribes, traditions, religions, and cultures that exist in Indonesia is the wealth and asset of the nation that must be maintained. The head of state explained that the diversity of the nation will become a strength if Indonesia remains united.The nation`s greatest asset is the unity and harmony of brotherhood. The greatest asset of our nation is unity. "Besides, we are blessed by Allah (the God) with abundance of natural resources," Jokowi remarked.The president reminded people on the importance of maintaining Islamic Brotherhood and national brotherhood. The president asserted that the unity and cohesiveness of the nation should not be sacrificed because of differences in regional head elections and presidential election."Do not let the choices of regent, the mayor, the governor, and the president create disunity among us. We do not greet each other between brothers, neighbors, and villages. Do not let fellow humans vilify each other, mock each other, and reproach each other, " the president remarked.The president went to the pulpit assembly along with Vice President Jusuf Kalla and Chairman of the Indonesian Ulema Council Ma`ruf Amin, accompanied by other scholars. A number of scholars who participated in the event include Ahmad bin Idrus Al Habsyi, Kyai Anwar, Kyai Haji Maimun Zubair and Mustofa Aqil Siradj, who is also as Chairman of the Council of Dhikr Hubul Waton, as well as the High Priest of Istiqlal Mosque Nasarudin Umar.In addition, Coordinating Minister for Political, Legal and Security Affairs Wiranto, Minister of Religious Affairs Lukman Hakim Saifuddin, Military Commander Marshal Hadi Tjahjanto, Police Chief Tito Karnavian, and Chief of Staff for the President Moeldoko were also present at the event. ( ant ) 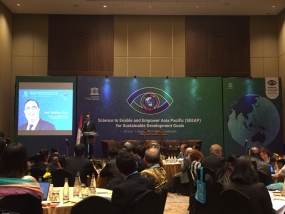 The United Nations Educational, Scientific and Cultural Organization held the Asia-Pacific Regional Strategic Coordination Meeting with the theme “Science to Enable and Empower Asia Pacific for the Goal of Sustainable Development” in Jakarta on Monday (30/7). Director and Representative of UNESCO in Jakarta, Shahbaz Khan, said that the two-day meeting tried to arrange the UNESCO scientific programs in Asia Pacific as a platform to effectively deliver the implementation of 2030 Agenda and the Sustainable Development Goals.

"We have here 17 countries from Asia Pasific come here to discuss how science and technology can help us achieve better sustainable development. And especially for sustainable development goals, 17 of them. The goals like water for example. Water security, how can we eradicate poverty, how can we have better human health, how can we have this transparent system to better data and technology. So that’s the idea here," Shahbaz Khan said. 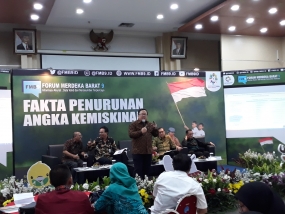 Calculation on Standard of Poverty Rate conducted by the Indonesian government through Central Bureau of Statistics is still higher than that of determined by the World Bank. This was stated by Minister of National Development Planning, Bambang Brodjonegoro in the Merdeka Barat 9 Forum themed “Facts of Poverty Reduction”  in Jakarta, on Monday (30/7). Bambang said that calculation of poverty rate which was conducted by Central Bureau of Statistics uses per capita reference unit and different standard for rural and urban areas.

“It has been above the standard which is usually determined by the World Bank, namely 2 US Dollars per day. We have 2.5 US Dollars per day. And we also must view based on rural and urban areas, namely per capita, per month. Most of all the people live in family. A family averagely has 2 to 3 children. So if there are 400 400 thousands, it must be multiplied with 5. It means 2 million rupiahs per month. Even in Jakarta it reaches 3.1 million per month. The point is it has been in accordance with the standard which has been determined internationally,” said bambang Brodjonegoro.

Furthermore Bambang explained the Central Bureau of Satistics has not calculated poverty rate of food and non-food group based on US dollar exchange rate against the rupiah which is now averagely Rp14,400 per 1 US dollar. But it uses US dollar of Purchasing Power Poverty. The conversion rate of  US dollar of Purchasing Power Poverty is the amount of rupiah which is issued to buy a number of commodities which is equal with 1 dollar in the United States. This year, the Central Bureau of Statistics announces that the number of Indonesia’s poverty is 9.82%. the number is the history for Indonesia, because for the first time, the percentage of poor people is in 1 digit. The Central Bureau of Statistics noted that the number of Indonesian poor people per March 2018, is 25.95million people. The number decreases compared to September 2017, namely 26.58 million people or 10.12 percent. (VOI/REZHA/Trans-yati/AHM)