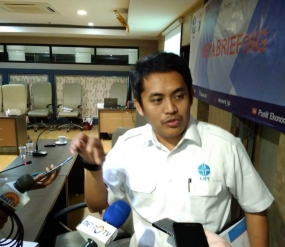 Development of Tourism Infrastructure Must Have Comprehensive Strategy

Researcher of the Indonesian Institute of Sciences -LIPI, Pangky Tri Febiansyah told  media after Media Briefing at   LIPI’s Building in  Jakarta on Wednesday (17/10) said that the existence of tourism infrastructure must confirm the importance of government to design comprehensive strategy. He said that the government  must give easiness for foreigners to have holidays in Indonesia.

Besides, Pangky Tri Febiansyah also explained that the design of tourism development which is comprehensively competitive must include physical infrastructure pillars, such as human resources, finance and system. He added that the dimension is expected to be a benchmark in a bid to materialize the quality tourism sector both as alternative income resources and the nation’s identity in a global spectrum. (VOI/AF/AHM) 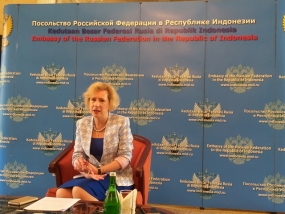 Russian Federation government will host the 12th Convention on Joint Convention between Indonesia and Russia in the field of trade, economy and technic held in Moscow, Russia on 26 October 2018. Ambassador of Russian Federation to Indonesia, Lyudmila Vorobieva to RRI World Service, Voice of Indonesia in Jakarta on Wednesday (17/10) said that  the delegation of the Joint Commission of Indonesia will be led by Coordinating  Minister of Economy, Darmin Nasution and the Russian delegation will be led by Russian Trade and Industry  Minister, Denis V. Manturov.

“Next week we would be having a session of our Joint Commission between our two governments on cooperation in difference spheres that our coach here from the Russian side by the Minister of Trade and Industry Mr. Manturov and from the Indonesian side the Minister Coordinator  (of economy) Pak Darmin Nasution. So, this will present a perfect opportunity to discuss all the ways to boost our relations in economic sphere, in trade, investment,” said Lyudmila Vorobieva.

Furthermore, Ambassador  Lyudmila Vorobieva said that the 11th Convention of Joint Commission between Indonesia and Russia was held in Jakarta in 2016 and the 2017 convention could not be done by the Russian Federation government because of technical reason. (VOI/Lalu Viqran Shink Khan/AHM) 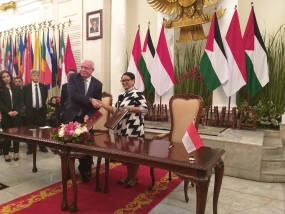 “This bilateral consultation is the first time between Indonesia and Palestine since the opening of diplomatic relation almost 30 years ago. Minister Riadh comes to Indonesia together with me to participate in solidarity week for Palestine that was held from October 13th to 17th. As you all know there has been a series of activities in this event. The activities that were held in Bandung or Jakarta are the reflection and symbol of government’s consistent support and Indonesian people for Palestinians’ struggle,” said Retno Marsudi.

According to Retno the two states reinforce their cooperation in trade especially between business people through the establishment of Indonesia-Palestine business council. On the same occasion, Palestinian Foreign Affairs Minister, Riadh Al Maliki stated the appreciation on Indonesian free tariff policy for Palestine’s products since 2018 is one of major factors for Palestine independence. On the solidarity week for Palestine the two ministers also officially opened the Palestine walk in Bandung on October 13th, 2018 and walk for peace and humanity in Jakarta on October 14th. Palestinian Foreign Affairs Minister also paid a courtesy visit to President Joko Widodo on October 15th, and visited National Agency of Food and Drug Control (BPOM) ./(VOI/REZHA/TRANS NUKE/AHM) 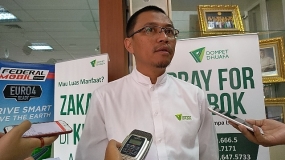 The Indonesian government has made a concrete step by holding an emergency response to natural disaster which happened 2 weeks ago. Government institutions and private companies including Dompet Duafa and Zakat Forum or FOZ moved directly to Palu, Donggala and other areas affected by the disaster to provide temporary house and medical assistance. It was reported that until Thursday (11/10) there have been more than 2000 people died. Director of ZIS Mobilization, Bambang Suherman said that at this moment the zakat Forum or FOZ still is carrying emergency response in several areas that has been affected by liquefaction such as Bararoa, Donggala and its surroundings. Bambang also said that FOZ will build a temporary house in Central Sulawesi just like Lombok, West Nusa Tenggara.

“Today FOZ still concerns in emergency and like in Lombok, FOZ will provide assistance until economic recovery process. So, today the information from FOZ delivered to the media is on several activities that FOZ has done. So there’s food, cluster water, sanitation, health and trauma healing they have all already undergone. So after that we will enter recovery model for reconstruction and continue the trauma healing with psychological first aid or PFA then after the process is running like in Lombok, we will slowly recover the economy. FOZ builds temporary house on behalf of all FOZ members. In Lombok all entities and members of FOZ build almost 4000 temporary houses and if Dompet Duafa is included it will bigger,” said Bambang Suherman.

Besides temporary house initiated by FOZ, Dompet Duafa also has designed earthquake friendly homes. This design is prepared for the transition phase from response to recovery while waiting for the government instruction. Dompet Duafa and members including CSR, State-Owned Enterprises (BUMN ) and government through National Agency for Disaster Management (BNPB) and Minister of Public Works and People’s Housing (PUPR) plan to build 15 thousand earthquake friendly houses. (VOI/NK /AHM)