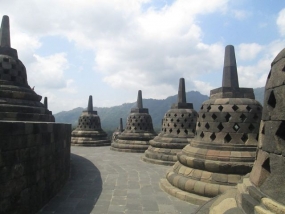 The Borobudur Temple Tourism Park in Magelang, Central Java, will introduce a special route for foreign tourists visiting the world cultural heritage temple.
The General Manager of Borobudur Temple Tourism Park I Gusti Putu Ngurah Sedana in Magelang, Saturday said the special route was meant to ensure tourists received the best service. "Visitors do not want disturbances or obstacles while entering the temple. They want to safely and comfortably get to the temple," he said.

According to him, the special routes for foreign tourists were immediately realized, because the months of July, August, September and October usually saw the most number of foreign tourists.

He said that with the best service, when they returned to their country, they could speak about their safe, comfortable and enjoyable experience at the Borobudur Temple, so that more tourists visit the largest Buddhist temple in the world.

"From Maingate, tourists can head straight to the temple and get out via an electric car and back to the parking lot," he said.

According to him the route for foreign tourists has been changed in such a way that tourists who come feel comfortable. (ANTARA) 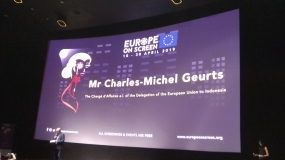 Film Contributes to the Economy and Creative Industry

Europe on Screen (EoS), the European film festival, was officially opened by Charge de Affairs of the European Union Delegation to Indonesia, Charles-Michel Geurts, Thursday evening (04/18/2019) in Jakarta. Europe On Screen is held in several cities in Indonesia from 18 to 30 April 2019. In his remarks, Charles-Michel Geurts said the film took part in the economy and creative industries in Europe and also in Indonesia.

Charles-Michel Geurts further added that cinemas are developing fast in Indonesia, making 1700 Cinemas in Indonesia which are slated to grow to some 7,500 in the next decade as representing the wealth of opportunity for Indonesia film making industry.

Europe on Screen (EoS) is the longest-running international film festival in Indonesia. Held the first time in 1990 under the name of “European Film Festival”, followed by the second edition in 1999, since 2003 the festival became an annual event under the current name of Europe on Screen. The festival primarily screens the high-quality film from European Union (EU) countries and other participating European countries with representatives in Indonesia. Jakarta is the anchor city of the festival, with 90% of the screenings and events are held in the city. The program comprises of film screenings, and other film-related events such as workshops, discussions, competitions, exhibitions, open-air screenings, and many others. (VOI/AHM) 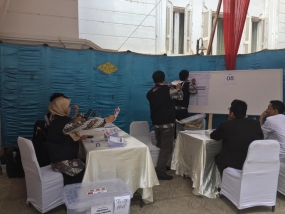 Foreign Election Committee (PPLN) Cairo, Egypt released the results of the recapitulation of the votes for the election of the president and Regional House of Representatives in Electoral District II Jakarta. Presidential Candidate Number 1 Jokowi-Ma'aruf obtained one thousand 597 votes and Presidential candidate pair Prabowo-Sandy received 4 thousand 739 votes with 6 thousand 456 ballots used and 120 invalid ballots. The situation at the counting location at the Indonesian Embassy in Cairo was conducive even though very few Indonesian citizens came to witness the vote count. Foreign Election Committee (PPLN) Cairo deployed 82 election officers to carry out the calculations. The vote counting was also attended by foreign oversight committee and witnesses. Indonesian Ambassador to Egypt Helmy Fauzy said the Indonesian nation was mature in democracy, following many wishes and praises he received from various ambassadors and the international diplomatic community regarding the holding of Indonesian elections in Egypt which were considered orderly and enthusiastically welcomed by Indonesian Citizens in Egypt.

"I want to appreciate the work of PPLN who are tirelessly preparing this national objective. A party of democracy where we are admired by the international community. I just received congratulations from various ambassadors and diplomatic communities in Cairo. Whoever elected as president and vice president, finally we are all brothers in the shade of the red and white flag, as citizens of the Indonesian nation," said Helmy Fauzi.

Ambassador Helmy Fauzi also gave appreciation to all committee for organizing elections in Egypt so that the election can be held peacefully and orderly. According to him, the dynamics in the election are natural but can still be tolerated without significant turmoil. Then Helmy appealed to all Indonesian citizens in Egypt to be able to wait for an official decision from the Indonesian Election Commission. (KBRN/ROCKY/AHM) 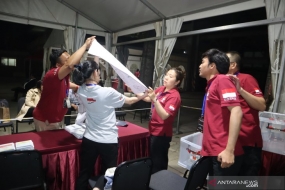 Presidential and Vice-Presidential candidates number 1, Joko Widodo-Ma'ruf Amin, excelled with above 80 percent of votes from Indonesian citizens who exercised their right to vote in China.

The vote acquisition data for the Presidential Election compiled from three Foreign Election Committees (PPLN), namely Beijing, Shanghai and Guangzhou, on Thursday, showed that the Jokowi-Ma'ruf pair got as many as 5,414 votes in China or around 83.7 percent of the total valid votes at 6,498.

The three PPLNs set up polling stations (TPS) for Indonesian citizens who live close to the Indonesian government representative office on Sunday (14/4). Shanghai PPLN and Beijing PPLN also send ballots by mail to Indonesian citizens who are registered in the Final Voters List (DPT) and Additional Election List (DPTb). The Guangzhou PPLN also held a voting with the mobile ballot box (KSK) method in Xiamen, Nanning, Haikou, and Guilin, besides also establishing polling stations at the Indonesian Consulate General in Guangzhou.

The vote acquisition data was compiled from the C1 plano form of the presidential and vice presidential candidate pairs at each polling station, postal, or KSK. (ANTARA)