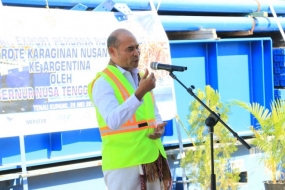 NTT Prepares Fish to be Exported Through El Tari Airport

Governor of East Nusa Tenggara Province  Viktor Bungtilu Laiskodat, said that officials are preparing a variety of fish products to be exported directly to destination countries through El Tari Airport in the provincial capital Kupang.Governor Viktor did not mention the destination countries for exports, but said direct exports are targeted to begin in 2019."So we will have tuna and others fish that will be packaged by state airport operator Angkasa Pura, according to the export standards of the destination countries," he said.Governor Viktor said he would continue to encourage development of a variety of the highest quality products from the provinces based on the islands so they can compete in the export market."We will continue to push, because there are many amazing products that we have here," he said.Previously, Governor Viktor released the first export of seaweed products from Tenau Kupang Port to Argentina on May 28, 2019, totaling 25 tons in the form of chips, exported through PT Rote Karaginan Nusantara.The Governor also said that his government is targeting to export Moringa in the form of flour to Japan in 2019. (ant) 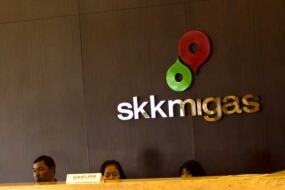 The Special Task Force for the Upstream Oil and Gas Business Activities (SKK Migas) has expected that the development of oil and gas exploration activities in Indonesia would be more encouraging  in the future in order to further expedite the development of the national oil and gas sector."In the future, SKK Migas hopes that the field development can be more encouraging with many incentives offered in the Gross Split package," said SKK Migas Program and Communication Division Chief Wisnu Prabawa Taher, in a release received here on Sunday.He explained, a number of incentives offered include starting from the location of the field, depth and condition of the reservoir, availability of infrastructure, other material content, oil density, and Domestic Component Level.Wisnu also revealed the value of the Definite Work Commitment and the Definite Commitment achieved in the Cooperation Contract amounting to 1.14 billion US dollars.That, he said, was for several exploration activities such as 47 G & G studies, 79 Exploration Wells, 38 Seismic Surveys, and 4 other Surveys during the 2018-2026 period in 24 Work Areas."Exploration activities can not only be carried out in the jurisdiction, but can also be carried out in the open area to encourage more discovery of new oil and gas fields from the results of exploration activities," said Wisnu.At present, SKK Migas also follows up on the results of the discovery of exploration oil and gas fields.(ant) 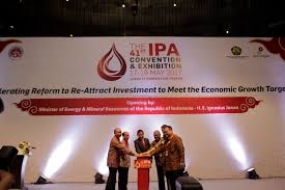 President of the Indonesian Petroleum Association (IPA) Tumbur Parlindungan expects oil and gas exploration activities in Indonesia to be encouraged given that there are still many oil reserves in the Southeast Asia region."Unfortunately, in the past 15 years, exploration activities have been quite minimal in Indonesia. In fact, many other countries whose oil and gas reserves are less than those of Indonesia have been improving for upstream oil and gas investments," Tumbur Parlindungan said in a press release received in Jakarta on Sunday.He stated that at present, Indonesia is having opportunities and challenges in restoring the glory of the upstream oil and gas sector.This, he continued, can be done by restoring the interest and enthusiasm of global oil and gas investors to carry out exploration and exploitation in the country."National oil and gas reserves are proven to be still relatively large in the Southeast Asia region, even in Asia. It's just that there needs to be additional oil and gas reserves realized by exploration," said Tumbur.For this reason, he said, this fact should be of concern to all stakeholders, considering that the portion of oil and gas in national energy needs is still highest when compared to coal, or with new and renewable energy.Based on the General Plan of National Energy (RUEN), the target of mixed fossil energy in 2025 reaches 47 percent compared to 43.5 percent in 2050. .Still based on RUEN, national oil production is projected at 567,000 barrels of oil per day (BOPD) in 2025, while in 2050 it is 698,000 barrel oil per day (BOPD).Meanwhile, the national crude oil refinery needs in 2025 reached 2.19 million BOPD and increased to 4.61 million BOPD in 2050.Assuming that national oil production is absorbed by 100 percent for domestic needs, national crude oil imports in 2025 will range from 1.67 million BOPD and 3.92 million BOPD by 2050. (ant) 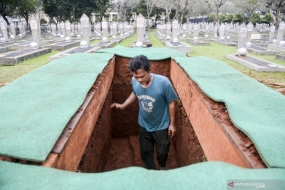 President Joko Widodo (Jokowi) is planned to lead the ceremony for the former First Lady Ani Yudhoyono's funeral held at the Kalibata Heroes Cemetery in South Jakarta on Sunday at 3:00 p.m. local time.

"Ani Yudhoyono's funeral ceremony will be held at 3:00 p.m. on Sunday. President Joko Widodo is planned to be the ceremonial inspector," Chief Communication Officer of the Yudhoyono Institute, Ni Luh Putu Caosa Indryani, said in Jakarta on Sunday. On Sunday morning at 08:00 a.m., the body of Indonesia's First Lady from 2004-2014, Kristiani Herrawati, or Ani Yudhoyono, is laid to rest in the Cikeas Hall, Bogor, West Java, to provide an opportunity for the people who would pay their final respects to the first lady.

Then at 12:00 p.m., the funeral procession will be continued with Dzuhur prayer and a congregation prayer for the late first lady at Cikeas.

At 13:30 p.m, the funeral ceremony of Ani Yudhoyono's body at the Cikeas Hall will be proceeded to the Kalibata Heroes Cemetery in South Jakarta.

A number of ministers, leaders of Democratic Party, politicians and families welcomed the body of Indonesia's First Lady from 2004-2014 Kristiani Herrawati.

Kristiani Herawati, a daughter of Sarwo Edhie Wibowo, or Ani Yudhoyono died in Singapore on Saturday at 11.50 local time.

Ani Yudhoyono suffered from blood cancer and was being treated at the National University Hospital, Singapore, since February this year. (ANTARA)