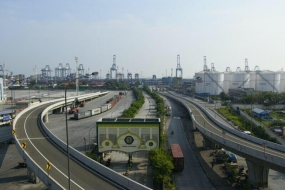 In the 2015-2019 period, infrastructure development became one of the priority programs of President Joko Widodo's Working Cabinet and Vice President Jusuf Kalla to improve economic growth and even distribution of development outcomes. The impact of the completion of a number of infrastructure projects, one of which contributed to the improvement of Indonesia's competitiveness.

The increase in Indonesia's competitiveness ranking is the largest in the Asia Pacific region. In the release, increased competitiveness was due to efficiency in the government sector, as well as progress in the availability of infrastructure and the business climate.

"Even so it is still under Malaysia (ranked 22) and Thailand (ranked 25). If our infrastructure stock is stagnant, the attractiveness of our investment will be inferior compared to neighboring countries, "said Minister of Public Works and Public Housing (PUPR) Basuki Hadimuljono.

The PUPR Minister said infrastructure development was a logical and strategic choice solely to improve Indonesia's competitiveness as well as to catch up. Moreover, Indonesia had experienced an economic crisis which had an impact on postponing and stopping the construction and maintenance of infrastructure. Therefore, since 2015 the government has shifted subsidies to productive spending in the form of infrastructure, health and education development.

Good competitiveness is needed to attract investment both from within and outside the country to increase national production and open jobs that will reduce the number of unemployed. "Inadequate infrastructure will make Indonesian products difficult to compete. "Low connectivity, which results in our logistics costs being more expensive than Malaysia, Singapore or even the Philippines," he said.

Minister Basuki said that in developing connectivity it was carried out in a multimodal synergy, for example the Ministry of Transportation to build ports and airports, the Ministry of PUPR would provide freeway access.

Therefore, for infrastructure, the financing of which can involve the community such as toll roads, the development is through investment in business entities. Thus the existing infrastructure budget is optimized for development in border areas, remote areas and community infrastructure such as drinking water, sanitation, suspension bridges, homes for low-income communities, and increasingly expanded service coverage. (Public Relations Ministry of PUPR / EN) 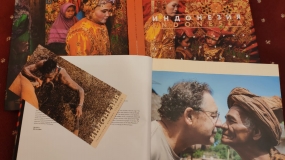 Indonesian Tradition in Books and Photo Exhibitions in Russia

The unique and exotic diversity of traditions, culture, nature and life of Indonesian people attract Sergey Kovalchuk, a photographer and traveler from Russia. With a touch of professionalism, high-quality, beautiful and attractive photographs are produced.

Sergey Kovalchuk showed his shots from an expedition to Indonesia in a photo exhibition "Indonesia. The Territory of Ancient Traditions (Indonesia. Territoria Vekovykh Traditsii) ". The exhibition was held in one of the museums in the center of Moscow, the State Museum of Oriental Art. The exhibition lasts for 19 days from May 29 to June 16, 2019.

Unmitigated a number of photos of the collection on display with a size large enough, 300 x 208 cm and 208 x 140 cm that adorn the park of the Museum. Visitors can immediately clearly see these interesting photos even from a distance away. Among the photos are those that describe the tradition of rock jumping in Nias, Eid al-Fitr celebrations, Balinese art performances, Papuan traditions, Pacu Jawi or Minangkabau cattle races, and others.

Sergey Kovalchuk not only exhibited his work at the exhibition, but also enshrined it in a collection book "Indonesia. The Territory of Ancient Traditions ". This 484-page book illustrates the diversity of Indonesian culture and traditions, many of which are traditions that have emerged since ancient times. Books printed using high-quality coated paper contain around 700 photos that are accompanied by information on each photo.

Through the book, Sergey Kovalchuk would like to convey to the reader about his interesting photo collection on the traditions of celebrations, rituals, traditional ceremonies, competitions and performances, dances and music, and the lives of Indonesian people.

The opening of the exhibition and book launch was held on May 29, 2019 ago. The event was attended by more than 150 invited guests, including photographers and news reporters. The event was also attended by the Ambassador of the Republic of Indonesia to the Russian Federation and the Republic of Belarus M. Wahid Supriyadi, Director of the MGIMO ASEAN Center Victor Sumsky, Executive Director of the Russian and Indonesian Friendship Cooperation Institute (LKPI) Mikhail Kuritsyn, and First Deputy Director General of the State Museum of Oriental Art Tatyana Metaksa.

"Indonesia is a very important country. I really like Indonesia, "said Sergey Kovalchuk at the opening of the exhibition and the launch of his book.

Sergey Kovalchuk explained that making this book requires a long process, including discussions with the team and a number of other parties. Various ideas emerged, but eventually they were focused on the traditions of the Indonesian people that still existed and were preserved. Therefore, the book is titled "Indonesia. The Territory of Ancient Traditions ".

Ambassador Wahid in his opening remarks at the exhibition and book launch Sergey Kovalchuk said Indonesia was a unique country with a diversity of cultures and traditions. What is witnessed here is the other side of Indonesian tradition. Ambassador Wahid supported Sergey Kovalchuk's efforts in organizing a photo exhibition about Indonesia in Russia. This activity can better provide an understanding of Indonesian culture and traditions to Russian society.

"This photo exhibition is a very good moment to start the 70th anniversary of Indonesian and Russian diplomatic relations in 2020. I also invited Sergey Kovalchuk to showcase his work at the Indonesia Festival on August 1-4 this year in Moscow," Ambassador Wahid said.

After the State Museum of Oriental Art, this photo exhibition is planned to be held at the All-Russia Exhibition Center (VDNH), Moscow on 19 June-7 July 2019. (Source: Indonesian Embassy in Moscow) 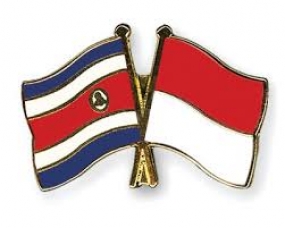 Indonesia-Costa Rica's Cooperation in Renewable Energy Should be strengthened

The collaboration between Indonesia and Costa Rica in renewable energy development should be strengthened to build national energy independence and a sustainable economy, said Deputy Speaker of the House of Representatives Fadli Zon in a statement in Jakarta on Friday. He made the statement after meeting the Head of Mission of Costa Rica, Esteban Quiros, at the complex of the House of Representatives in Jakarta, Wednesday (29/5).According to him, Costa Rica assessed that Indonesia was an important country, and as such, it wanted to strengthen relations with Indonesia across various fields, including the energy sector and the environment.Costa Rica managed to implement clean and renewable energy as the country had succeeded in producing 98.53 percent of alternative energy sources that come from, among others, hydropower, wind and geothermal energy.Zon said that Indonesia was also concerned over the issue of climate change and new and renewable energy, which were very important for achieving the Sustainable Development Goals (SDGs).The Executive Director of the Institute for Essential Services Reform (IESR), Fabby Tumiwa, earlier stated that the development of new and renewable energy (EBT) was still very slow even though Indonesia was rich in EBT resources.Fabby said that throughout 2015-2018, the addition of capacity of the generator of new renewable energy was only 882 mega watts (MW). In fact, from 2010-2014, the capacity of the generator of new renewable energy could reach 2,615.7 MW.If the effort continues until 2019, he estimates that the number will only increase by 300 MW. As a result, the maximum capacity is only 1,200 MW.With the achievement of the new renewable energy portion in the energy mix at only 8 percent, the utilization of EBT is still very slow, even though according to the National Medium Term Development Plan, the current achievement should have reached 16 percent in order to reach the target of 23 percent by 2025.The electrification ratio was estimated to increase to meet the target of 96 percent by the end of 2019.However, existing regulations were actually considered to hinder the development of EBT, he continued.Meanwhile, the Indonesian Chamber of Commerce and Industry (Kadin) stated that the use of EBT requires capital of around 90 billion US dollars to reach the target of 23 percent in the national energy mix in 2025. 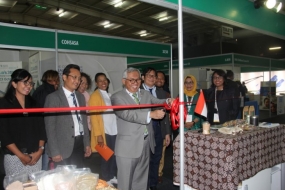 Indonesia to Augment Sales of Medicines and Medical Devices in Africa

Indonesia has constantly driven the sales of medicines and medical devices in Africa's market and deepened penetration of pharmaceutical products in African nations, noted a written statement by Indonesia's Embassy in Pretoria, received in Jakarta, Friday."The African people's requirements of medical devices and medicines are high, but their access is yet limited. This offers a great opportunity for our medical products to continue to make inroads into the African market," Indonesian Ambassador to South Africa Salman Al-Farisi remarked.Ambassador Al-Farisi made the statement at the opening of the Indonesian Pavilion at the Africa Health Exhibition held on May 28-30, 2019, in Johannesburg, South Africa."The Indonesian branding must be strengthened, one of which is through our participation in this big exhibition," Ambassador Al-Farisi emphasized.Four Indonesian companies participating in the exhibition were PT. Biofarma, PT. Dexa Medica, PT. Phapros, and CV. Kurniatama Lestari. The strategically located Indonesian Pavilion successfully attracted some visitors at the exhibition.PT Biofarma, a vaccine and anti-sera manufacturer that has distributed its products in 40 African countries, carried vaccine samples, such as for measles, Hepatitis B, polio, and meningitis, to the exhibition.Private company PT Dexa Medica also showcased its products, including cold medicine, children's immunity-booster, medicines for allergy and diabetes, as well as for bloating and nausea.PT Phapros, the renowned pharmaceutical company that produces Antimo (antiemetic), promoted various medicines, including for treating tuberculosis, health supplements, and herbal medicines for hypertension.In the meantime, a small and medium scale enterprise, CV. Kurniatama Lestari, promoted traditional health products comprising herbal tea, herbal coffee, and spa products, such as body scrubs and massage oils.On the sidelines of the exhibition, the Indonesian Embassy in Pretoria successfully brought the Indonesian delegation to meet with the local authority, specifically the South African Health Products and Regulatory Authority or SAHPRA, and prospective partners -- distributors and pharmaceutical companies -- from South Africa, Tanzania, Mozambique, and Botswana.Not only marketing products, but the Indonesian Embassy in Pretoria also worked with Indonesian business delegates to establish cooperation with local stakeholders, including through joint production, joint ventures, or joint research and development.Medicines and medical devices from Indonesia have been well-known and have penetrated several countries in Africa. The Indonesian Embassy in Pretoria has constantly worked towards strengthening Indonesia's presence in the African market, one of which is by participating in some exhibitions.Africa Health is the biggest health exhibition in the African continent that gathers various actors in the business of health, pharmaceutical, and health-care manufacturing.The event has drawn over 10 thousand visitors and was attended by 560 exhibitors from 39 countries every year. Apart from Indonesia, some other nations including the United States, Germany, China, India, Austria, Japan, Turkey, and South Korea, also participated in the exhibition.