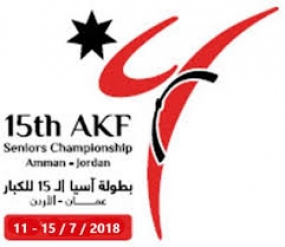 The Indonesian karate national team won five medals at the Asian Karate Championships held on July 13-15, 2018, in Amman, the capital of Jordan, as noted in a written statement received in Jakarta on Tuesday. A total of 12 athletes of the team participated in the 15th Asian Karate Federation (AKF) Senior Championship in Amman. Some 300 karetakas or karate players from 29 countries participated in the championship, with several "kumite" (tarung) and word (jurus) matches for individuals and teams. Indonesian national team's Cok Istri Agung Sanistya Rani managed to win a silver medal in the women`s tarung under 55-kilogram weight category. Four bronze medals were won respectively in the women`s individual match by Nawar Kautsar Mastura, women`s individual under-50 kilogram category match by Intan Nurjanah, women`s individual under-68 kilogram fight by Ceyco Georgia`s Zefanya Hutagalung, and men`s under-75 kilogram fight by Sandy Firmansyah. The championship, held at the Prince Hamzah Hall, Sport City, was opened by Princess Zeina Rashed, the wife of King Abdullah II bin Hussein`s cousin, and closed by Prince Hassan bin Talal, uncle of the King, who awarded the medals to the winners. The AKF 2018 Championship is a test run before the 18th Asian Games and qualifying for the Tokyo Olympic Games in 2020. Rudy Gunarto from the National Training Supervisory Team of the Executive Board of the Karate Sport Federation in Indonesia remarked that in recent weeks, the karate athletes had participated in a series of trainings and matches in several countries. Some activities of the Indonesian karate national team include the training camp in Egypt, the Asian karate championship in Jordan and continued with training camps in Ukraine and Japan, respectively for "kumite" and "kata." Through participation in the series of activities, the athletes are expected to deliver peak performance to play optimally in the 18th Asian Games next month. (ANTARA) 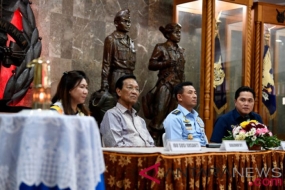 Indonesian badminton legend Susy Susanti has said that the Asian Games torch, which she has just picked up from New Delhi, is a symbol of friendship between Indonesia and India. The torch would also serve as a symbol for the success of the Asian Games implementation and for the athletes of Indonesia, as the host, she said upon her arrival in Yogyakarta on Tuesday from India. "The process of (carrying) the Asian Games flame is an amazing experience for me. The process was smooth, except for a minor obstacle while trying to enter the airport in India," she told the press. Chief of Staff of the Indonesian Air Force Marshal, Yuyu Sutisna, confirmed that there was a problem when the New Delhi airport authorities tried to stop them from carrying the torch. "In accordance with civil aviation safety, even a cigarette is not allowed on a plane. But, we had sought permission from the local authorities to take the Asian Games flame (to Indonesia), although the process of obtaining the permission took time," he stated. The Asian Games torch was carried to Yogyakarta from New Delhi aboard a Boeing 737-500 owned by the Indonesian Air Force. The flight took around 11 hours. "We departed (for New Delhi) to pick up the torch on Saturday (July 14). The flame was kept for one night at the Indonesian embassy in India, before being taken to Indonesia by plane," he remarked. Yogyakarta has been selected as the start of the Asian Games torch relay in Indonesia because it is known as the city of culture, history, education, and tourism, according to Erick Thohir, chairman of the Indonesian Organizing Committee of Asian Games 2018. Choosing the right city as the start line of the Asian Games torch rally is important because Asian Games is not just a mere sport event but is a means to promote the tourism and image of Indonesia worldwide, he remarked. "Yogyakarta is a historic city, and we want to promote its tourism," Thohir revealed. The 2018 Asian Games torch relay began its 18,000-kilometer journey on Sunday from the National Stadium in New Delhi, where the flame was lit for the first time at the inaugural edition in 1951. In Indonesia, the relay will cover 18 provinces across the country, prior to the implementation of the 18th Asian Games, which would be co-hosted by Jakarta and the South Sumatra provincial capital of Palembang from Aug 18 to Sept 2, 2018. (ANTARA) 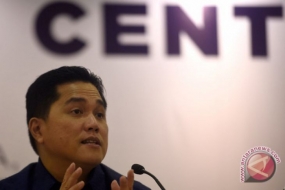 The Asian Games 2018 is not only a multi-sport event but also offers the momentum to promote Indonesian culture and tourism, Indonesian Asian Games Organizing Committee (INASGOC) Chief Erick Thohir stated. Thohir attended a ceremony to welcome the Asian Games flame at the Adisutjipto Airport, Yogyakarta, on Tuesday. Various cultural attractions were presented by the Yogyakarta Culture Department to welcome the arrival of the Asian Games flame, ranging from "gamelan" to Sekar Pudyastuti dance. The flame was then escorted to the Museum Dirgantara by a parade of the classic drum band of "bregodo," or the Yogyakarta royal infantry troop. "Our rich culture, as we see today, is in the global spotlight," Thohir emphasized. Hence, he opined that Yogyakarta being selected as the first stop of the flame is the right decision, considering that it is also a historical city. "Starting tomorrow, the flame will be united with the eternal flame from Mrapen (Grobogan Regency, Central Java) and will be carried in the rally that passes through 53 cities in Indonesia," he added. The Boeing Air Force AU A-7307 aircraft, carrying aboard the Asian Games flame from New Delhi, India, arrived at the Adisutjipto Airport, Yogyakarta, on Tuesday morning. The flame has been installed at Museum Dirgantara. Torch Organizer Relay Asian Games 2018 Virza Reskyana Indra stated that after being installed at the Aerospace Museum, on Wednesday (July 18), the Asian Games flame will be carried to the Ratu Boko temple. In the evening, the torch will be brought to Prambanan Temple to be united with the eternal fire of Mrapen by Vice President Jusuf Kalla. On Thursday (July 19), he noted that the Asian Games torch will be brought to the Jogja Monument to be relayed along the 10 kilometers through Jalan Mangkubumi, Malioboro, Zero Kilometer Point, to Yogyakarta Square. After returning to Tugu Yogyakarta, the Asian Games torch will be handed over by Yogyakarta Mayor Haryadi Suyuti to the INASGOC Committee to be taken to Solo, Central Java. (ANTARA)

The Indonesian government has prioritized programs on reducing the poverty rate, and the efforts seem to have yielded positive results. The Central Bureau of Statistics (BPS) revealed that the number of people living below the poverty line had dropped to 25.95 million, or 9.82 percent of the population in March 2018, from 27.77 million, or 10.64 percent of the population a year earlier. "The poverty ratio (in March 2018) was the lowest in comparison with the ratios in the earlier periods," BPS Head Suhariyanto informed reporters in Jakarta on July 16, 2018. Across Indonesia, the number of people categorized as poor in March 2018 had dropped to 1.82 million from that recorded a year earlier. In urban areas, the number of poor in urban areas in March 2018 totaled 10.14 million people, or 7.02 percent, and in rural areas, 15.81 million, or 13.2 percent. In March 2017, the number of poor people in urban areas had reached 10.67 million, or 7.72 percent, while in urban areas, the figure totaled 17.1 million, or 13.93 percent. Food commodities having a major impact on poverty in urban and rural areas are rice, cigarettes, eggs, instant noodles, and refined sugar, while non-food commodities include housing, gasoline, electricity, education, and toiletry. At the regional level, the lowest poverty rate was recorded in Kalimantan, at 6.09 percent, totaling 982,300 people. The number of poor in Java reached 13.34 million, followed by Sumatra, 5.9 million; and Sulawesi, two million. A decline in the poverty ratio was recorded in five provinces: Central Java, down 0.91 percent; South Sulawesi, a drop of 0.43 percent; West Java, a decrease of 0.38 percent ; Banten, a 0.36 percent decline; and Southeast Sulawesi, down 0.35 percent. However, an increase in the poverty ratio was recorded in five provinces: Jambi, up 0.03 percent; Aceh, 0.05 percent; West Sulawesi, 0.07 percent ; the Riau Islands, 0.08 percent; and Lampung, 0.10 percent. In the meantime, Maluku and Papua have recorded the highest poverty ratio of 21.20 percent, followed by Bali and Nusa Tenggara, 14.02 percent, which are all located in the eastern Indonesian region. East Nusa Tenggara (NTT), for instance, remained the third-poorest province in the country, after Papua, with a poverty ratio of 27.74 percent, and West Papua, with a poverty ratio of 23.01 percent, although NTT`s poverty ratio had dropped slightly, according to Head of the NTT BPS office Maritje Pattiwaellapia. NTT`s poverty ratio dropped slightly to 21.35 percent in March 2018, from 21.36 percent in September 2017. A total of 1,142,170 people in the province, with a population of 5.2 million, were categorized as poor. Basically, the percentage of people living in poverty in the eastern part of Indonesia in March 2018 was still higher than that of the western part. "It (the poverty rate) mostly fell, but it remains a major homework in the eastern part of Indonesia, as the percentage of its poor people is far higher than that of the western part," BPS Chief Suhariyanto pointed out. Suhariyanto expressed hope that several infrastructure projects being implemented in the eastern part of Indonesia would help to reduce the number of people living in poverty there. "Hence, development activities in the eastern part of Indonesia would hopefully have a positive impact on the reduction in poverty rate there," he asserted. In fact, World Bank has advised that better logistics will boost the country`s competitiveness and also help reduce poverty by lowering the prices of goods and services in remote regions, especially in Eastern Indonesia. "Efficient maritime logistics are vital for higher growth of the manufacturing, agriculture, and service sectors," World Bank Country Director for Indonesia and Timor-Leste Rodrigo A. Chaves noted in a statement. Meanwhile, the Government of Indonesia will set its focus on the development of Independent Prosperous Village (DSM) as part of the efforts to address poverty in border regions. "We will focus on the development of Independent Prosperous Village in some 41 districts and cities that have border regions to address the issue of poverty and improve the people`s welfare," Social Affairs Minister Idrus Marham remarked recently. Marham believes that if citizens in border regions are prosperous, then the resilience of the state will also be robust. The social affairs minister stated that universities are being involved in the development of DSM at the field level by deploying students to conduct Real Work Lecture, or KKN. The Social Affairs Ministry`s partnership with universities in developing the DSM program began in 2015, with the development of 140 villages to become independent in realizing prosperity. The DSM program is a new breakthrough in a bid to accelerate the handling of poverty. Universities are expected to act as initiators and guides based on their potential, capacity, and capability, while the Ministry of Social Affairs will function as the facilitator and director. (ANTARA)